WATCH: Steve Coogan as an Irish farmer singing rebel tunes on the BBC is hilarious

On 'This Time with Alan Partridge,' Steve Coogan plays an Irish farmer who sings rebel tunes on the BBC. 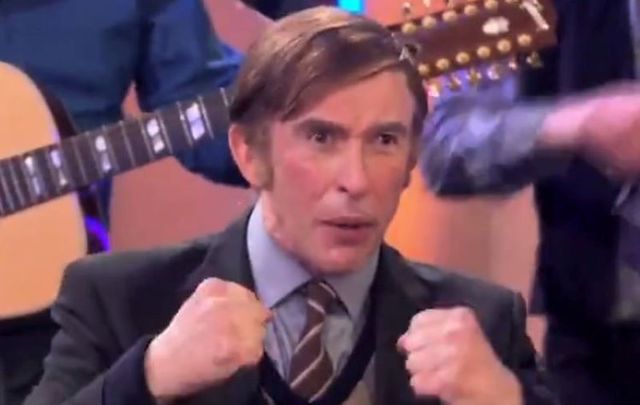 ‘This Time with Alan Partridge’ St. Patrick’s Day episode is being hailed as “genius”

Steve Coogan played an Irish farmer who sings rebel tunes during this week’s St. Patrick’s Day episode of his BBC comedy ‘This Time with Alan Partridge.’

Coogan played double duty in the episode, playing both his titular Alan Partridge, as well as Martin Brennan, also known as 'Irish Alan.'

As the credits begin to roll, Brennan breaks out in a rousing rendition of both ‘Come Out Ye Black and Tans,’ and ‘The Men Behind the Wire.’

“Oh my God, that was like an advert for the IRA,” says Partridge.

The Journal notes that, perhaps surprisingly, there was no “substantial fury” following the clip of Irish rebel songs on BBC, save for one tweet from a parody account of Ian Paisley, Jr:

Disgusting to see this pro IRA stance taken by the BBC. I will be writing to the Director General to make the point that the IRA were terrorists and to put them on a pedestal like this is akin to glorifying the acts of ISIS.

I am incandescent with rage. https://t.co/mtLqGYFwT1

Worth noting is that in September, British rocker Rod Stewart said the BBC “won’t let me sing 'Grace' because of it's Irish, anti-English overtones in the song.”

Oh my god that was the best episode. It’s getting better and better. The Irish Alan Partridge lookalike was a stroke of genius. The whole thing is. #ThisTime pic.twitter.com/q6FpHrRk0s

Steve Coogan has made Alan Partridge react nervously and/or shocked, as most brits usually would with the mention of ‘black and tans’, ‘ira’ and ‘men behind the wire’. While also impersonating a man called Martin, an Alan Partridge doppelgänger. That’s one smart comedic cookie pic.twitter.com/jWFlx4UniJ

Steve Coogan has managed the impossible; taking Alan Partridge to a whole new level. ‘Irish Alan’ singing “Come Out You Black And Tans” is a piece of TV gold.
If you haven’t been tuning in to #thistime, then you need to start.

Come out ya Black and Tans sang on BBC1 just before the 10 o’clock news? It can only be Alan Partridge genius! I nearly wet myself #ThisTime

Half of Scotland throws the TV out the window. The SNP’s Met of the North issue arrest warrant for Alan Partridge. Summit to be called this week. NBM issue 14 statements apologising to the DUP pic.twitter.com/wrNmaQbQRX

In 2013, Coogan, who is British, said of his Irish roots: “I’m half Irish and Alan does make all sorts of Irish references. I spent nearly every summer of my life growing up in the west of Ireland and I’m very familiar with Mayo and Cork and West Cork.”

“A lot of the humor I do as Alan is British prejudice against the Irish which can sound just like jokes against the Irish but it has to be put into the context of Alan’s ignorance which is why we get away with it.”

What do you think of Steve Coogan's Martin Brennan character? Let us know in the comments!