Sarah Hyland has been sharing behind-the-scenes snaps from 'Epic' while filming in Ireland. 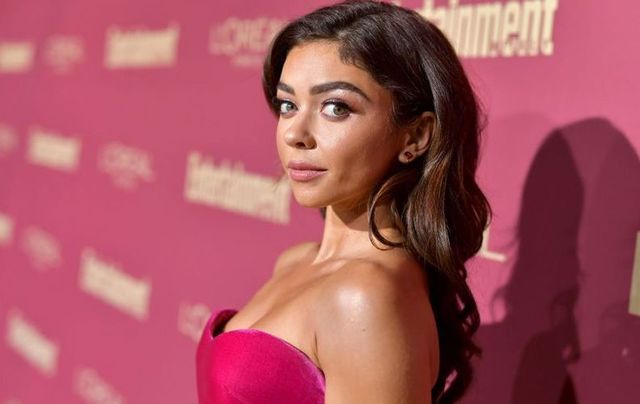 Actress Sarah Hyland, who was recently cast as Princess Rose in the upcoming ABC series 'Epic, has shared some behind-the-scenes photos while she's in Ireland filming.

On May 11, Hyland posted a photo to her Instagram showing herself in princess-like long hair extensions, posing with a horse. The pic was captioned: "A Rose and her steed: An EPIC Series…maybe."

She added: "So excited to be working on a project for the first time in over a year! I’ve already been overseas for a month with the most amazing cast, we started shooting yesterday, and let’s just say that this is going to be…EPIC."

On May 16, English actor Nick Dunning shared a photo to Twitter of himself and Hyland while on the set.

In another Instagram post on May 23, Hyland shared pictures with the caption "Just a little witch barefoot in the woods of Ireland."

According to TVLine, ‘Epic’ was first announced in December 2019 and was initially described as “a romantic anthology series set in the fairytale universe of Disney and taking place in a Disney-like Enchanted Forest.”

The one-hour drama series will reinvent classic Disney fairytales for a new audience. If that premise sounds familiar, it should be no surprise that the creators of the show are Adam Horowitz and Edward Kitsis, who were also behind the popular 'Once Upon a Time' series that ran for seven seasons on ABC.

Brigitte Hales, a writer who is also from 'Once Upon a Time,' has penned the new series.

Deadline reports that Hyland, who starred for eleven seasons in ABC's 'Modern Family,' will play Rose, who is "as princess-y as princesses come, and about to marry her Prince Charming. But her fairy tale gets upended when he has second thoughts, and trying to preserve her dreams opens her up to an unexpected world."

American actress Brittany O'Grady, who plays the lead in Epic, shared this snap from Dublin on May 14:

Luttrellstown Castle in Clonsilla, where 'Epic' is reportedly filming, is the perfect fairytale setting for the new show. The castle dates from the early 15th century and has often played host to royalty, including Queen Victoria of England and Princess Grace of Monaco.

It has also been a popular venue for celebrity events, including the 1999 wedding of David and Victoria Beckham, and the christening of Croía McGregor, the daughter of Conor McGregor and Dee Devlin.

'Epic' is set to be released on ABC later this year.