The real story of Queen Victoria and the Irish Famine

Queen Victoria was dubbed "The Famine Queen" by Irish revolutionary Maud Gonne, but in reality, did she push her government to do more to help the famine-stricken Irish? 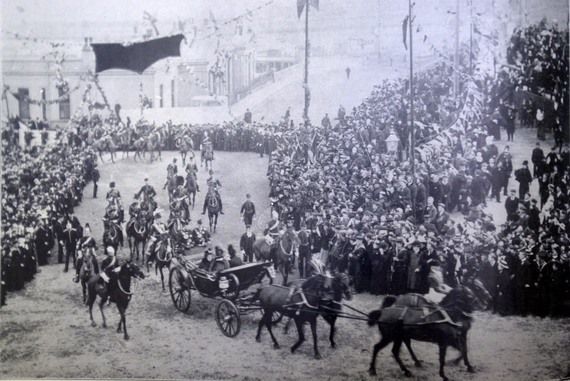 Queen Victoria on a state visit to Ireland. Rolling News

Popular English drama “Victoria” overplays the extent to which Queen Victoria sought to aid the famine Irish in the 1840s, exaggerating her interest in Ireland.

On August 2, 1849, British Queen Victoria, oft dubbed "The Famine Queen" visited Ireland after the country had already suffered through years of the Great Hunger. Yet to what extent did she go towards helping the Irish in their pain and poverty?

An episode of the hit show "Victoria" drew surprise from British viewers in 2017 for the extent to which the Irish suffered both during the 1840s famine and, while under English rule which was finally brought to their attention.

While a defining period in Irish history, it is sadly widely uncovered by the British educational system. The role that Britain’s Queen Victoria played in coming to the aid of her then-subjects, however, was pushed into the spotlight with the airing of the episode,s.

British viewers were truly shocked to discover the brutality of the Great Hunger. Many of them had not previously known of the death of at least one million and the emigration of a further million of their closest neighbors in what must be regarded as the darkest and most horrifying seven years in Irish history.

Many commended the episode for finally portraying the devastating horrors of the Irish famine on British TV screens for the first time. Much praise was heaped onto screenwriter Daisy Goodwin for not shying away from the rather unpalatable role played that the British landlords and government played in the disaster.

However,  the portrayal of Queen Victoria, quite commonly known as The Famine Queen throughout Ireland and who was depicted as berating her government ministers for not doing enough to help the Irish, did draw some criticism.

“There is no evidence that she had any real compassion for the Irish people in any way,” said historian Christine Kinealy, founding director of Ireland's Great Hunger Institute at Quinnipiac University.

While it wasn’t until the later years of her reign that a new generation of Irish nationalists, including Maud Gonne and James Connolly, began to blame Queen Victoria for the famine, historical records show that the British monarch did little to aid the Irish at the time. Prime Minister Lord John Russell even called on the queen to do more to end the starvation.

Kinealy has studied Queen Victoria’s diaries as well as the writings of Prime Ministers Peel and Russell, and she believes that “Victoria” may be overplaying the real queen's empathy.

“We know that really she had no interest in Ireland and so to imagine she wanted to do more doesn't really ring true,” Kinealy told IrishCentral.

“In her very long reign, she only visited Ireland four times and one of those times was 1849 when the famine was still raging but coming to an end. At that point, she didn't do anything, so it's hard to imagine that what they're portraying is really based on fact."

Not only did Queen Victoria fail to rise to the challenge of protecting the Irish people, the monarchy and those working for it also went out of their way to prevent others from outshining the queen’s own mediocre attempts, preventing a significant amount of money from making its way to Ireland from Turkey.

“She was urged by her Prime Minister Russell to do something for Ireland and so, in January 1847 she issued a Queen's letter asking protestants to raise money for the Irish,” explains Kinealy.

“In January 1848, she also made her own donation, significantly to a British agency, but she gave £2,000. She is the first person named on their records as having given money but because she gave £2,000, it was the Royal protocol that nobody could give more than the monarch.

"We do have documentation that the Sultan of Turkey, who was himself a very young man at the time, offered to give £10,000 but in Constantinople, the British embassy went to his people to say that it would offend royal protocol so he reduced his donation.”

The offer from the Ottoman Sultan, Khaleefah Abdul-Majid I, would be worth approximately £800,000 ($1.7m) today and could have greatly benefited the Irish people.

While Prime Minister Peel in the first year of the famine implemented policies that prevented mass death in Ireland, his successor Lord Russell was not as successful, and thus, in 1846 mass mortality began.

“I am sure poor Peel ought to be blessed by all Catholics for the manly and noble way in which he stands forth to protect and do good to poor Ireland. But the bigotry, the wicked blind passions it brings forth is quite dreadful, and I blush for Protestantism!” Queen Victoria wrote in a letter to her uncle, the Belgian King, on April 15, 1845, the first year that the blight destroyed the potato crop.

By 1846, the tide was turning, however,  and it was becoming apparent that  Queen Victoria would have to make her first official trip to Ireland.

“As this is not a journey of pleasure like the Queen’s former ones, but a State act, it will have to be done with a certain degree of State, and ought to be done handsomely,” she wrote to Lord Russell in August 1846.

However, she didn't make the trip until 1849. The young queen was accompanied by her children, journeying mainly to the east coast of the country where the worst of the Irish famine was over.

“She didn't see it first hand in that sense and we know that there was a very high military presence and that any trouble was suppressed and people were arrested … I don't think at that time people blamed her for the famine to some extent, that interpretation comes a bit later,” Kinealy states.

In fact, it wasn’t until her fourth and final visit to Ireland as an old lady in 1900, just a year before her death, that the well-known nickname of The Famine Queen came to be. The almost blind, wheelchair-using monarch was branded as such by Maud Gonne, Irish revolutionary, suffragette, and muse of W. B. Yeats who worked alongside Irish labor leader and 1916 Easter Rising revolutionary James Connolly to protest the arrival of the British Queen in Ireland.

In a scathing article titled “The Famine Queen,” Gonne accused Queen Victoria of failing to help "the survivors of sixty years of organized famine." Although quickly banned by the British authorities, the article's damning nickname for Queen Victoria stuck. The queen found herself shouldering some of the blame for the approximately one million deaths.

“I think Britain has yet to confront its past and its unpalatable past and the famine is definitely an unpalatable aspect of that relationship,” Kinealy states of the recent development of the Irish famine finally at least being recognized in British TV programming.

“English and British people, in general, have very little knowledge of Irish history and that's a real shame because so much of our history is intertwined and that's really something that should be addressed.”

Should more be done to address Britain's role in Ireland's Famine? Let us know your thoughts in the comments section, below.

WATCH: A nostalgic tram journey along the Dublin coast in 1960