A Roscommon man's incredible journey and his passion project renovating an Irish caste to a luxury guest house, Cloontykilla Castle 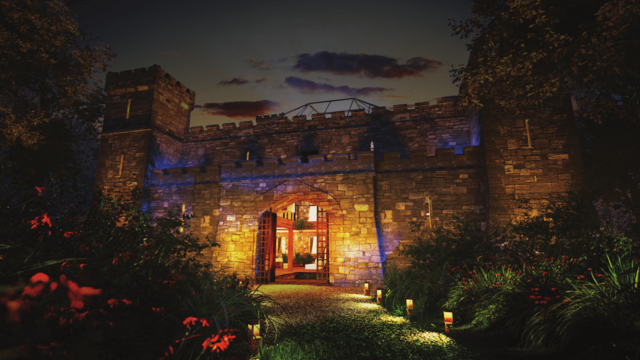 When Sean Simon was seven years old, he told his parents that he would someday become rich and buy the two castles that are located in nearby Lough Key Forest Park. Here’s how he made that dream come true.

“If you have more dreams than achievements - you're young.”

That quote was attributed to Shimon Peres, an Israeli statesman, and president. It describes the embodiment of every one of us when we were growing up. We all had dreams and aspirations, but some of us leave it at the dream stage and never go on to achieve those dreams and make them a reality.

Sean Simon was a famous London West End show and Irish film star who went on to garner fame with shows and movies such as “The Little Shop of Horrors,” “Are You Lonesome Tonight” and also in movies such as; “Into the West” with Gabriel Byrne and “The Deal Breaker” as Laurence Feelgood.

Originally from Boyle in County Roscommon, Simon was determined to succeed in life and in doing so created a lifestyle that most of us could only be envious of. Sean Simon blagged his way into joining the Miami Showband at the age of 14 after having lied to the band’s manager and agent telling them that he was 16.

Simon was caught out when the local Catholic Monsignor wrote to the agent telling him that Sean was just 14 and that he would stop the Miami Showband from ever playing any of the halls that belonged to the church, which in those days was almost every parish hall.

The letter from the priest worked as Simon was sacked, but in his determination, he decided to head to the bright lights of London rather than face a slagging from his schoolmates and took the well-worn emigrant route but with a formulated plan for success already jolting around in his head.

Tragically, and within weeks of arriving in London, Sean picked up a newspaper and read the headline – which screamed “Miami Massacre!” When he read down further and saw the photographs of the killing scene, he quickly realized that had he stayed with the band then he too would likely have been murdered along with his bandmates by Loyalist killers. This gave him further impetus to follow his dreams as he fully understood that if life is likely to be too short then it needed to be lived to the fullest.

Simon knocked on doors of well-known artist’s agents and managed to end up opening shows for established stars such as Sir Harry Secombe, Mike Yarwood, Ken Dodd, and many of the legendary entertainers from the 60s and 70s era. Sean Simon got his big break while playing as understudy to legendary Elvis impersonator and pop singer, PJ Proby, and eventually took over the lead role in the West End show “Are You Lonesome Tonight” that propelled him to fame and fortune.

Sean recounts how as a young seven-year-old he told his parents that he would someday become rich and buy the two castles that are located in nearby Lough Key Forest Park, which is close to Carrick-on Shannon in County Leitrim. Through sheer determination and hard work, this childhood dream eventually manifested itself, and Sean purchased the two castles from the Irish Forestry Board for not an unreasonable sum. Thankfully Sean’s parents both lived long enough to see his childhood dream come true.

The first property that needed his immediate attention and protection was the castle known as Castle Island or McDermott’s Castle, which is located out in the middle of Lough Key itself. The castle holds over 800 years of stored memory in its stone walls and is perhaps one of the most significant historic sites in Ireland’s Hidden Heartlands, particularly given that it is also the site of a 2,500-year-old Bronze Age settlement.

Sean set about protecting his castles from further ruin and damage caused by the harsh environment and weather, often undertaking dangerous tasks such as cutting ivy which was as thick as a human wrist from the top of a precariously perched ladder, three stories up the side of the old castle walls. Health and safety were definitely not a priority for a man with little fear of life or danger.

The second castle is shore-based and far more accessible. This is the castle that featured on the UK Channel 4 program, “Grand Designs,” which is now available on Netflix US. This particular show, featuring Cloontykilla Castle, had the highest-grossing viewership in the history of the program.

Sean’s dream almost came crashing down around him when in 2008 when Ulster Bank (which is effectively a Scottish bank) effectively pulled the plug on him and left him seriously struggling to finish the projects and ultimately his dream. His “loan” was subsequently sold on to a “vulture fund” and thus the battle to save the dream continued – until he met another Irish advocate, Brian Reilly, who managed to persuade an American investor friend, Kenneth D. Peterson, who already has business interests in Ireland, to come on-board and keep the project alive.

In the meantime, Sean is doggedly pursuing Ulster Bank through the Irish courts for alleged fraud against him, amongst other things.

The Peterson investment has helped restart what Sean Simon describes as a labor of love and absolutely nothing less than. Simon is turning Cloontykilla Castle into a magnificent 5* luxury retreat for paying guests and emphasizes that it will be a completely authentic experience in its feel, layout, and design. Sean wants to let his guests experience life in the 13th century as it was, albeit with necessary mod cons and additions such as underfloor heating, and so on.

While targeting the corporate sector, he will also happily provide full period dress and the actual day-to-day experiences that a Lord and his family would have experienced centuries ago – servants included! The exclusive venue will cater for small private weddings and parties too.

Sean’s vision of the historical experience is not something that is currently available in Ireland and will no doubt be a huge attraction to the many visitors who are searching for such a fantastic holiday. Ironically, on meeting Sean and noticing his rugged good looks, one instantly gets the impression that he is already the Baron of Lough Key but just missing the royal title.

Sean Simon hasn’t stopped dreaming even though he has already achieved a lifetime of experiences that most of us can only allude to. Sean says that he won’t give up on the childhood dream until he is personally welcoming guests into his stately castle, and even then, he says (with a wink in his eye) that there is still another dream yet to be completed on his beloved Castle Island.

You can find more information about Cloontykilla Castle on their website. For wedding & event enquiries, contact www.secretbridesmaid.ie