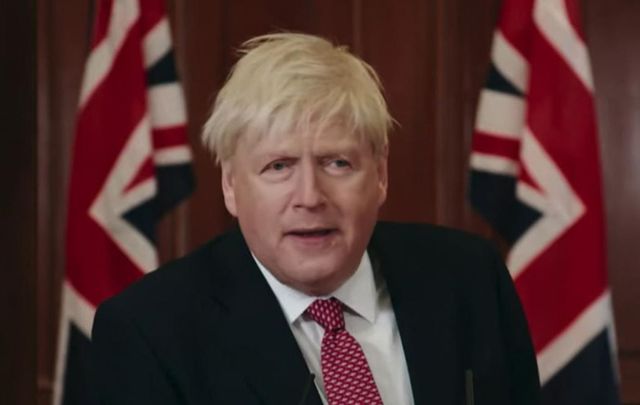 Kenneth Branagh as Boris Johnson in "This England". Sky

The death of Queen Elizabeth has put Britain on pause, with all kinds of events being postponed while the United Kingdom mourns.

Among the entertainment offerings getting a temporary pause is "This England" starring Kenneth Branagh, a series about Britain’s initial response to the Covid-19 pandemic which was supposed to debut on September 21 but will now air a week later on Sky.

Branagh plays former United Kingdom Prime Minister Boris Johnson, and the resemblance, thanks to hours in a makeup chair is pretty remarkable. The 61-year-native of Belfast, Kenneth Branagh, told The Sunday Times that he’s proud of the show, though some critics have said tackling the pandemic in a drama now is bad timing.

“There will be those who say it’s too soon,” Branagh says. “I think these events are unusual and part of what we must do is acknowledge them. It might allow people to process a little of what went on. Any way of understanding it better is important.”

The new Oscar winner – he won his statue for Best Original Screenplay for "Belfast" – was transformed into Johnson by spending at least two hours each day in the makeup chair. After filming he would take walks to “unwind” from playing the now former prime minister, who nearly died from Covid-19 but flouted lockdown rules which led to his ouster.

Series makeup designer Vanessa White says the task was daunting at first. “I thought, ‘Oh my God, okay. Yep, Ken Branagh, Boris, right,’” she said. Once a 3D test of the transformation proved it could be done White and Branagh were on board.

“The only thing left of Ken Branagh is his chin, his couple of moles. That’s it. Everything else is prosthetic,” White said.

"This England" doesn’t have a US airdate yet, but no doubt it’ll make its way here via one of the streamers.

Check out the teaser trailer for "This England" below: