Our favorite Irish songs that are sure to get the party started! 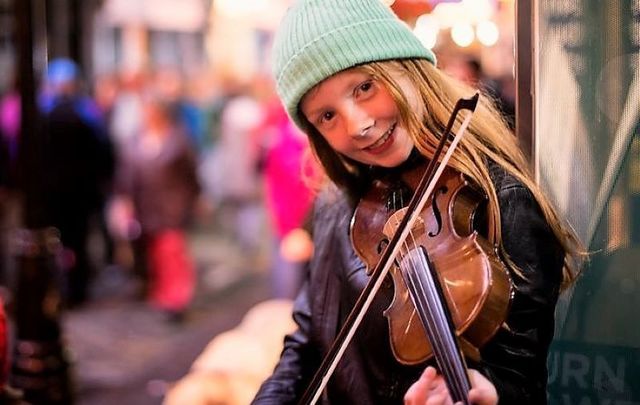 Get listening - these are the top Irish songs to know before St. Patrick's Day Tourism Ireland

No matter how big or small the party is, God knows you could well be just dancing around your own house, here are some Irish songs you need to know!

Here are our favorite Irish songs that are sure to get the party started:

A traditional Irish song about a magnificent, though improbable, a sailing ship that reaches an unfortunate end. One that is only sung after many a beer is consumed and Irish people get nostalgic. Some may end up in tears.

"On the fourth of July eighteen hundred and six,

We set sail from the sweet cove of Cork,

We were sailing away with a cargo of bricks,

For the grand city hall in New York,

'Twas a wonderful craft, she was rigged fore-and-aft,

And oh, how the wild winds drove her.

And we called her the Irish Rover…"

This song was written in the early to mid-1840s by Thomas Osborne Davis, the founder of the Young Irelander movement that led changes in Irish nationalism.

The song is a prime example of the "Irish rebel music" sub-genre (though it does not celebrate fallen Irish freedom fighters by name or cast aspersions on the British government as so many rebel songs do).

"When boyhood's fire was in my blood,

And Ireland, long a province, be?

A Nation once again…!"

This one's a folk song about the Irish Republican Army in the Irish War of Independence. The title is borrowed from the older (but different) military song, a slow march that is always played at the annual Festival of Remembrance when the Chelsea Pensioners file in ("Then steadily shoulder to shoulder, steadily blade by blade, marching along, hearty and strong, like the boys of the old brigade").

"Oh, father why are you so sad

On this bright Easter morn’

When Irish men are proud and glad

Of the land where they were born?

A far off distant day

In this song, the narrator and his cousin Arthur McBride, both Irish, were taking a walk when they were approached by three British military recruiters, a recruiting sergeant, a corporal, and a drummer. The recruiters attempt to induce the narrator and Arthur McBride into military service, extolling the virtues of serving the King of England, having money to spend, and wearing nice clothes.

"I had a first cousin called Arthur McBride,

He and I went a walkin' down by the seaside;

In search of good fortune and what might betide,

It was just as the day was a'dawnin."

Read more: Remembering The Dubliners' Luke Kelly with his most loved songs

Come Out Ye Black and Tans

An Irish rebel song referring to the Black and Tans, the British paramilitary police auxiliary force in Ireland during the 1920s.

The song was written by Dominic Behan as a tribute to his father Stephen, who is often named as the author instead of his son. The melody was adapted from an old air used for the Loyalist song "Boyne Water" as well as several other songs in English and Irish.

"Oh, come out you black and tans,

Show your wife how you won medals down in Flanders,

Tell her how the IRA made you run like hell away,

From the green and lovely lanes in Killeshandra…."

Some Say the Devil is Dead

This song from Ireland is a satirical one about the British Army written by Derek Warfield. He is an Irish singer, songwriter, historian, and a founding member of the musical group the Wolfe Tones.

Some say the devil is dead and buried in Killarney.

And joined the British Army…."

Read more: This Celtic Thunder cover of "The Sound of Silence" will leave you spellbound

This song, set in Dublin, Ireland, has become the unofficial anthem of Dublin City. It has also acquired the status of an Irish anthem.

The Molly Malone statue was first unveiled on Grafton Street by then Lord Mayor of Dublin Alderman Ben Briscoe during the 1988 Dublin Millennium celebrations, declaring June 13 as Molly Malone Day.

The song tells the tale of a beautiful fishmonger, who plied her trade on the streets of Dublin, but who died young of a fever. Recently a legend has grown up that there was a historical Molly, who lived in the 17th century. She is typically represented as a hawker by day and part-time prostitute by night.

In contrast, she has also been portrayed as one of the few chaste female street-hawkers of her day.

where the girls are so pretty,

I first set my eyes on sweet Molly Malone,

As she wheeled her wheel-barrow,

Through streets broad and narrow,

A ballad usually set to the tune of the 'Londonderry Air,' it is most closely associated with Irish communities.

'Danny Boy' was written by the English lawyer and lyricist Frederick Weatherly in 1910. Although the lyrics were originally written for a different tune, Weatherly modified them to fit "Londonderry Air" in 1913, when his sister-in-law in America sent him a copy.

Ernestine Schumann-Heink made the first recording in 1915. Weatherly gave the song to the vocalist Elsie Griffin, who in turn made it one of the most popular songs in the new century. In 1928, Weatherly suggested that the second verse would provide a fitting requiem for the actress Ellen Terry.

And here are the Danny Boy lyrics:

From glen to glen, and down the mountain side,

The summer's gone, and all the roses falling,

Or when the valley's hushed and white with snow…"

An Irish folk ballad set during the Great Hunger (1845-1850), it tells the story of a fictional man named Michael from near Athenry in Co. Galway, who has been sentenced to transportation to Botany Bay, Australia, for stealing food for his starving family. It is a widely known and popular anthem for Irish sports supporters and fans of Celtic football.

Irish American punk rock band The Dropkick Murphys breathed new life into the song when they recorded their own version of it.

"Low lie the fields of Athenry

Where once we watched the small free birds fly

Our love was on the wing

We had dreams and songs to sing

It's so lonely 'round the fields of Athenry."

Read More: How "The Fields of Athenry" became Ireland’s most famous song

And just because this next one is really pretty funny....

There's No One As Irish As Barack O'Bama

A song created by a Co. Limerick-based group The Corrigan Brothers (formerly known as Hardy Drew and the Nancy Boys) when it was discovered that the Obama family tree has Irish roots in Moneygall, Co. Offaly. Their song was a huge hit on YouTube and continues to be sung around the world.

"From Kerry and Cork to old Donegal

Let's hear it for Barack from old Moneygall

From the lakes if Killarney to old Connemara

There’s no one as Irish as Barack O’Bama

There's no one as Irish as Barack O'Bama..."

What Irish song gets you in the party spirit? Let us know in the comments!