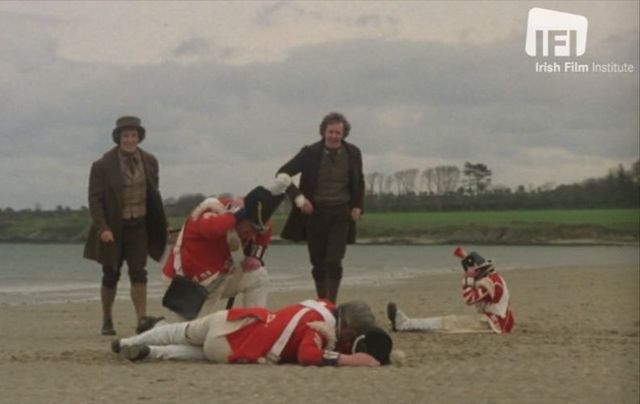 Directed by Tiernan MacBride, "Christmas Morning" is a visual representation of the Irish folk song "Arthur McBride and The Sergeant," played and sung by Irish singer Paul Brady.

The lyrics tell the story of Arthur McBride (Paul Bennett) and his cousin (Paul Wilson) who fight off a recruiting sergeant (Godfrey Quigley) when he tries to enlist them in the British army.

The song itself is an old Irish anti-war song, and it is reported to have originated around 1840. It has been performed by many artists over the years including Bob Dylan.

The short Irish film "Christmas Morning" was nominated for a Palme d’Or in 1978 for Best Short Film.

"Christmas Morning" is currently featured in the IFI Archive Player's Christmas Crackers, a delightfully varied collection that will trigger all sorts of memories of Christmases past.

1960s adverts boldly promote booze and cigarettes as ideal gifts for friends and family, and Gael Linn’s cinema newsreel (1959 – ’64) capture the magic of the city streets lighting up, the simplicity of The Moving Crib, and the charm of Moore Street traders with their wind-up toys, while Kieran Hickey’s Moonmen celebrates the hardy swimmers of the Half Moon Swimming Club as they brave the elements on Christmas Day 1965.

"Christmas Morning" is published here with thanks to the Irish Film Institute (IFI), who IrishCentral has partnered up with throughout 2021 to bring you a taste of what their remarkable collection entails. You can find all IrishCentral articles and videos from the IFI here.