Throughout the years there have been over 75 statues and monuments populating the streets of the Irish capital, Dublin. 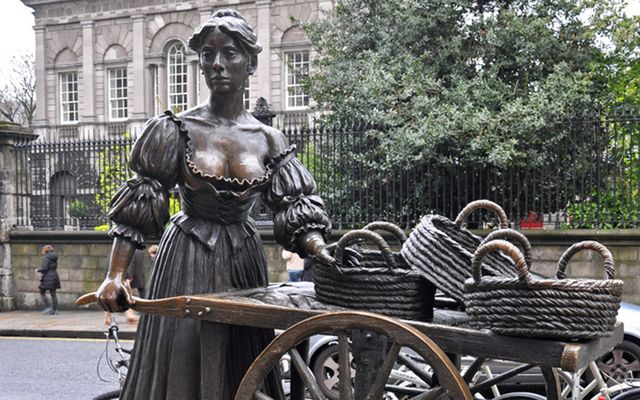 Throughout the years there have been over 75 statues and monuments populating the streets of the Irish capital, Dublin, including this, the famous Molly Malone in her old location. Anomisa / Flickr

I think it’s safe to say that the Irish have a fixation with statues. In Dublin, the streets and parks are clogged with them. Throughout the years there have been over 75 statues and monuments populating the streets of the Irish capital.

O’Connell Street is a prime example of this. At the south end of the thoroughfare sits Daniel O’Connell, the Liberator of Catholics in the 19th century. Dan is surrounded by busty angels, some of whom still bear the bullet scars on their bosoms from Ireland’s rebellions.

To the north end stands “The Uncrowned King of Ireland,” Charles Stewart Parnell, as portrayed by the brilliant Irish-American sculptor, Augustus Saint-Gaudens. The monument reads: “No Man has a right to fix the/Boundary to the march of a nation.” Many a Dublin wag has pointed out Parnell is pointing behind him at the Rotunda Maternity Hospital. Considering the carnal events surrounding the fall of Parnell, this juxtaposition of words and simultaneous gesticulation on Parnell’s part has not gone unnoticed by the natives.

And that may be just the reason why Dubliners love their statues—they get to comment on them and, better still, put words into their mouths.

Other statues in O’Connell Street include the architect of Irish self-prohibition—The Pledge—Father Matthew. Not far from him is a man who was a teetotaler—and one of the great labor organizers of his time—James Larkin. Facing the General Post Office at the foot of North Earl Street is the world’s number one novelist, James Joyce. He is perched against his walking stick and patiently poses for pictures with eager tourists. The locals, very aware of the great writer’s predation toward the drink and the whore refer to him as “The Prick with the Stick.”

Right by the GPO stands the Millennium Spire. The Spire stands in the exact place where Nelson’s Pillar stood for 158 years before being blown up by the IRA in 1966. This event, it is said, made Lord Horatio Nelson Ireland’s first astronaut. Lord Nelson’s fate has been met by other icons of the British occupier—statues of both King George II and William of Orange were also blown up. Queen Victoria’s statue met a more ironic fate—like many Irishmen under her reign, she was poetically exiled to Australia where she is currently on display in Sydney.

As one crosses O’Connell Bridge and enters Westmoreland Street the first statue is that of poet and songwriter Thomas Moore, famous for his “The Meetings of the Waters.” Moore’s statue sits atop a former public lavatory which prompts Leopold Bloom to comment in Joyce’s “Ulysses”: “They did right to put him up over a urinal: meeting of the waters.” (Note: during the construction of the Lucas tram system, Tommy Moore has been temporarily removed from his perch beside Trinity College.)

A few paces away is the front gate of Trinity College, stoically guarded by the statues of alumni Oliver Goldsmith and Edmund Burke. And just up College Green opposite the Bank of Ireland is Edward Delaney’s statue of Thomas Davis, Young Ireland nationalist, and author of “A Nation Once Again.” There is a fountain surrounding Davis and it has become a popular pastime for Trinity students to pour in detergent, creating a bubbly mess, making this the cleanest statue in all of Dublin.

Maybe the most popular statue in Dublin is voluptuous Molly Malone at the corner of Grafton and Suffolk Streets. Tourists love to be photographed with her bosoms, not to mention her cockles and muscles as well. To one and all, she is “The Tart with the Cart.” (Like Tommy Moore’s statue, because of the installation of the Lucas, Molly Malone has been temporarily relocated to in front of St. Andrew’s Church on Suffolk Street, now a tourism office.)

The advance up Grafton Street brings us to St. Stephen’s Green, guarded by the Fusiliers’ Arch, which commemorates all those who fought for Britain in the Boer War. To Dubliners, it is simply, “The Traitor’s Gate.” The Green itself is populated with busts, which as you can see, in many forms, seems to be a preoccupation with the Irish: Joyce again is represented as are the Countess Markievicz, who commanded this park during the Easter Rising, Jeremiah O’Donovan Rossa, the incorrigible old Fenian, and United Irishman patriot Robert Emmet who declared from the dock before execution in 1803: “Let no man write my epitaph…until my country takes her place among the nations of the earth…”

Outside the Green, not far from the Shelbourne Hotel is another Edward Delaney statue, the imposing figure of Theobald Wolfe Tone, one of the leaders of the 1798 rebellion. In 1971 Protestant militants blew up poor Wolfe Tone and he had to be taken in, said the locals, to have his genitalia resoldered.

Not far from the Green is Merrion Square, home to genii such as W.B. Yeats, George Russell, and Oscar Wilde. In fact, across the street from the house Wilde grew up in is one of the most outrageous statues in Dublin—a colorful Oscar comically and lewdly laid out on a boulder. He is known to one and all as “The Quare in the Square.” Not that far away in the Square, there is a bust of Michael Collins, the greatest Irish statesman, whose revolutionary genius helped create today’s Irish Republic.

The famine memorial along the quays. Image: Dermot McEvoy.

There are other statues around Dublin town dedicated to the memories of writer Brendan Behan, poet Patrick Kavanagh, patriot James Connolly, fatigued shoppers (the frequently mocked “Hags with the Bags” on the north end of the Ha’penny Bridge), and the victims of the Great Famine. All have a story—and every Dubliner is eager to tell you his version of it.

Dermot McEvoy is the author of the “The 13th Apostle: A Novel of a Dublin Family,” “Michael Collins, and the Irish Uprising “and “Our Lady of Greenwich Village," now available in paperback from Skyhorse Publishing. He may be reached at dermotmcevoy50@gmail.com. Follow him at www.dermotmcevoy.com. Follow The 13th Apostle on Facebook.