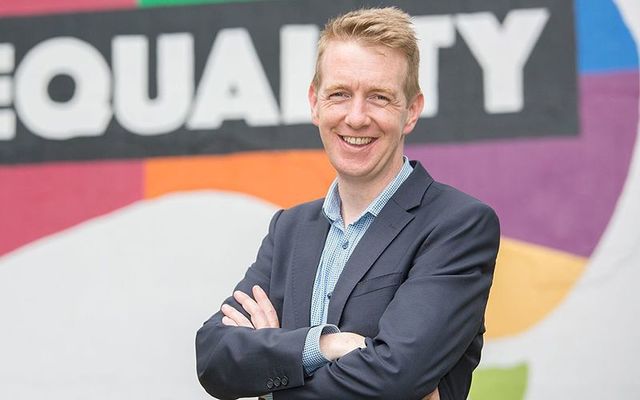 Whether they're passing through or woven deeply into the fabric of the city, Irish Humans of New York are among the many things that make New York City great.

In this series, Wendy C. Fries chats with Irish folks in NYC. Listen below for the podcast episode from TogetherFM in Dublin. Up first: Tiernan Brady, LGBT activist and campaigner.

Tiernan Brady is a lot of things.

An Irish man from Co. Donegal, an LGBT campaigner, an activist instrumental in the success of Ireland's and Australia's marriage equality referendums, Tiernan Brady is also a man who absolutely, positively refuses to wrestle pigs.

When IrishCentral met him at the offices of the Consulate General of Ireland in New York recently, Tiernan talked about those landmark equality campaigns, why he thinks the Irish gravitate to New York, and yeah, why running successful social campaigns means steering clear of the barnyard.

"The Irish story is an amazing one," he says, because when the rural Irish went to America "we went to the cities. We built strong communities, with a strong sense of identity and a strong sense of helping each other." On their own in a vast country, the Irish had to stick together, "and you can't do that in a big rural space like Kansas, but you can do that in a city like New York. We gravitated to it, and shaped it."

Read More: Why do Irish Americans still identify as Irish?

Though it was more than the Irish forming New York's foundations of course. Go to Rockefeller Center, Brady says, and you'll see three flags one beside the other—Ireland, Israel, Italy. "That should be the flag of New York. Those three cultures have known travesty, oppression, hard times…[giving] them the ability to survive when history said they shouldn't have, but they made New York."

Now living Down Under after the passage of Australia's marriage equality legislation in December 2017, Brady thinks New York is an amazing "bubbling, gigantic, voluble pot of ideas and energy, and joy and anger all at once… So many things that happen in NY reverberate across the world. This is not a world capital, this is the world capital."

Though this Bundoran man has worked in Sydney, Taipai, Dublin, and London, he believes the ideas that emanate from New York, "can change anywhere. And that's all about the energy, this gigantic energy."

It's that need to make room for discussion that brings us back to those barnyard animals Tiernan refuses to fight.

To create the environment of respect, dignity, and conversation necessary for lasting social change—like marriage equality acts—he says it's vital to ignore inflammatory media and keep sight of what you're fighting for. So absolutely, positively do not "run down rabbit holes, don't eat red herrings, and never mud wrestle with a pig—because you get muddy and the pig loves it."

The Irish understand difficult but worthy journeys. "There's an empathy in the Irish experience," Tiernan says. "We've been on the other side of the mirror."