"Gone With the Wind" has been temporarily pulled from HBO Max due to the 1939 film's "racist depictions." 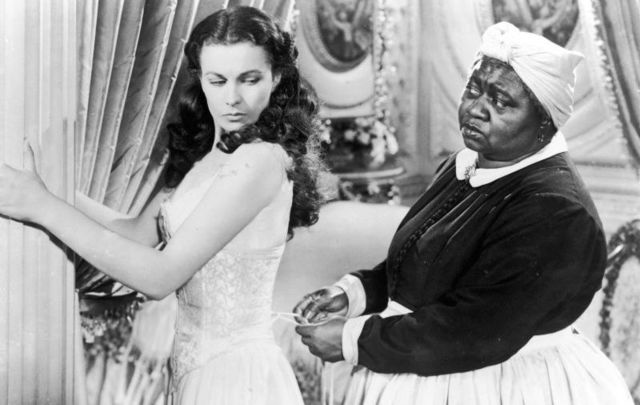 Vivien Leigh and Hattie McDaniel in a still from the 1939 film 'Gone with the Wind.' Getty Images

"Gone With the Wind" is based on the book by Irish American author Margaret Mitchell and is set during the American Civil War.

“Gone With the Wind" has been temporarily pulled from the newly-launched HBO Max streaming service until “historical context” can be added to the film which features "racist depictions."

In 2017, IrishCentral published this opinion piece considering if and when “Gone With the Wind," based on the book by Irish American author Margaret Mitchell, would ever be banned for its racist depictions.

Read More: Will "Gone With the Wind" be banned for racist portrayals of happy slaves?

According to Deadline on June 9, a spokesperson for HBO Max said: "'Gone With the Wind' is a product of its time and depicts some of the ethnic and racial prejudices that have, unfortunately, been commonplace in American society.

"These racist depictions were wrong then and are wrong today, and we felt that to keep this title up without an explanation and a denouncement of those depictions would be irresponsible.

"These depictions are certainly counter to WarnerMedia’s values, so when we return the film to HBO Max, it will return with a discussion of its historical context and a denouncement of those very depictions, but will be presented as it was originally created, because to do otherwise would be the same as claiming these prejudices never existed.

"If we are to create a more just, equitable and inclusive future, we must first acknowledge and understand our history."

The temporary removal of “Gone With the Wind” from HBO Max comes after John Ridley, the Oscar-winning screenwriter of the 2013 film “12 Years a Slave,” penned an op-ed for the Los Angeles Times arguing that the film “romanticizes the horrors of slavery” and that how the film is presented on the platform should be reconsidered.

Ridley wrote: “I would just ask, after a respectful amount of time has passed, that the film be re-introduced to the HBO Max platform along with other films that give a more broad-based and complete picture of what slavery and the Confederacy truly were. Or, perhaps it could be paired with conversations about narratives and why it’s important to have many voices sharing stories from different perspectives rather than merely those reinforcing the views of the prevailing culture.”

The Irish influence in "Gone With the Wind"

The 1939 film version of "Gone With the Wind" was based on the book of the same name that was published in 1936 by Irish American author Margaret Mitchell.

Mitchell’s great-grandfather Phillip Fitzgerald was born in Co Tipperary and immigrated to France before making his way to Georgia. In the US, he married Eleanor McGhan. The couple had seven children, but only three survived, including their daughter Annie Fitzgerald.

Annie, who is thought to be the inspiration for Mitchell's Scarlett O'Hara character, went on to marry Irish-born John Stephens. The couple gave birth to May Belle, Margaret's mother.

As our sister publication Irish America Magazine noted in 2011: “Central to Mitchell’s Irish identity was the couple represented by her grandfather, Irish-born John Stephens (1833-1896), and his wife Annie Fitzgerald (1844-1934), whom he married in 1864 in Atlanta’s Immaculate Conception Church as Sherman’s troops were heading south toward Atlanta.

“It is widely believed that the cantankerous and headstrong Annie Fitzgerald Stephens was the principal model for Scarlett, although Mitchell would deny that there was any connection between her work and her family. Annie’s father, Philip Fitzgerald, who was born in Tipperary, owned the family plantation located about twenty miles south of Atlanta. They called it ‘Rural Home’ or ‘Home Place,’ and it would later become the Tara of ‘Gone With the Wind.’

“According to Mitchell’s biographer, Darden Asbury Pyron, ‘These two Irishmen [Stephens and Fitzgerald] helped shaped the most fundamental stuff of Margaret Mitchell’s imagination.’ Of her grandfather and great-grandfather, Mitchell said: ‘They were both Irishmen born and proud of it and prouder still of being Southerners.’”