Will "Gone With the Wind" be banned for racist portrayals of happy slaves?

Irish American writer Margaret Mitchell could be highly criticized for racist quotes within her most famous book, “Gone With the Wind”. 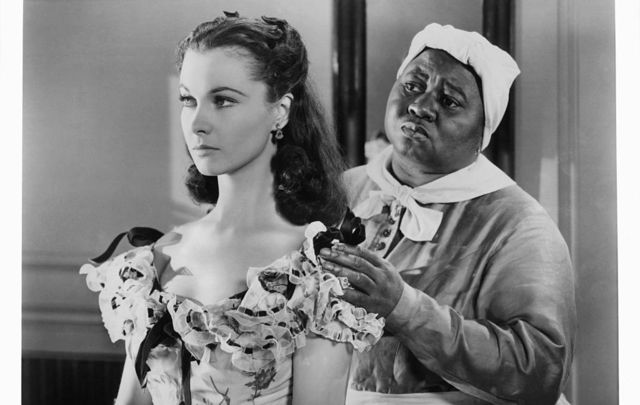 Hattie McDaniel tries to console Vivien Leigh in a scene from the film 'Gone With The Wind', 1939. Metro-Goldwyn-Mayer/Getty Images

“Gone With the Wind," the classic novel and movie about the old South, is suddenly getting a very frosty reception.

Author Margaret Mitchell, a proud Irish American, built the plot around Scarlett O’Hara, the daughter of an Irishman living in a mansion called Tara in the South before and after the Civil War. Scarlett is arguably the most popular female movie character of all time.

Adjusted for inflation, the four-hour epic has made $2 billion and still continues to make millions in syndication every year. But will its alleged racist message finally close it down?

Mitchell modeled Tara on local plantations in the area of the country where she lived pre-Civil War, particularly the Clayton County plantation on which her maternal grandmother, Annie Fitzgerald Stephens (1844–1934), the daughter of Irish immigrant Philip Fitzgerald and his American wife Eleanor Avaline "Ellen" McGhan, was born and raised.

But now there is trouble looming for the movie. After Charlottesville and the Nazi marches aimed at keeping Confederate statues in public areas in 2017, a reappraisal of "Gone With the Wind" and its embrace of slavery as a happy institution has come into question.

Slate Magazine reported that year that the annual showing of the film to 1,500 southerners in Memphis, Tennessee, at the Orpheum Theatre was to be discontinued, breaking a 34-year run. “The Orpheum Theatre Group has decided not to include ‘Gone with the Wind’ in its 2018 Summer Movie Series,” a statement from the theater begins.

“As an organization, whose stated mission is to ‘entertain, educate and enlighten the communities it serves,’ the Orpheum cannot show a film that is insensitive to a large segment of its local population.”

The main objection is to the "Lost Cause" theme of the movie which claims the Civil War was not really about slavery, which it most certainly was, and much more about the nasty Yankee invasion of the South.

"Gone With the Wind" has been accused of whitewashing slavery

The house where "Gone With the Wind" was penned, now the Margaret Mitchell museum.

Journalist John Beifuss says the movie completely glosses over the slavery issue writing “....but it's a whitewash of slavery – its’ suggestion that the true ‘Old South’ was a place of happy 'darkies' who benefited from the gentle temperaments of their owners – popularized a myth that’s proved as hard to kill as a boll weevil.

“As Scarlett’s beloved father asserts early in the film, in defiance of 'Yankee' objections: 'We’ll keep our slaves, with or without their approval.'”

Lou Lumenick, the New York Post critic, certainly saw the movie as unsuitable for the modern era in 2015. At the time he stated “'Gone With the Wind' should go the way of the Confederate flag,” or at least its predecessor “'The Birth of a Nation,'” studied as a racist symbol rather than exhibited as entertainment.

Read more: Call for removal of Confederate plaque in Ireland

“True, ‘Gone with the Wind’ isn’t as blatantly and virulently racist as D.W. Griffith’s ‘Birth of a Nation,’” Lumenick wrote, but the “more subtle racism of ‘Gone with the Wind’ is in some ways more insidious, going to great lengths to enshrine the myth that the Civil War wasn’t fought over slavery – an institution the film unabashedly romanticizes.”

Betsy Hancock of the Tennessee Theater stated if they showed the film again they would be presenting it with a program note: “I think what I’m gonna ask of our audiences if we—when we—show ‘Gone With the Wind’ again, is … what was [the depiction of slaves] saying not so much about the Civil War, but about the United States in 1939? And what was it saying about the proliferation of the Lost Cause myth?”

Margaret Mitchell would surely be taken aback. She was a feminist and very forward-looking woman who would hate what is now being made of her best-seller.

She was Irish through and through and would likely argue the book humanizes the slaves rather than having them as mere props. One thing for sure, her Irish blood would be up as so much of the film was based on that lineage

As our sister publication Irish America Magazine noted: “Central to Mitchell’s Irish identity was the couple represented by her grandfather, Irish-born John Stephens (1833-1896), and his wife Annie Fitzgerald (1844-1934), whom he married in 1864 in Atlanta’s Immaculate Conception Church as Sherman’s troops were heading south toward Atlanta.

“It is widely believed that the cantankerous and headstrong Annie Fitzgerald Stephens was the principal model for Scarlett, although Mitchell would deny that there was any connection between her work and her family. Annie’s father, Philip Fitzgerald, who was born in Tipperary, owned the family plantation located about twenty miles south of Atlanta. They called it ‘Rural Home’ or ‘Home Place,’ and it would later become the Tara of ‘Gone With the Wind.’

“According to Mitchell’s biographer, Darden Asbury Pyron, ‘These two Irishmen [Stephens and Fitzgerald] helped shaped the most fundamental stuff of Margaret Mitchell’s imagination.’ Of her grandfather and great-grandfather, Mitchell said: ‘They were both Irishmen born and proud of it and prouder still of being Southerners.’”

In the end, that was the tradition that Margaret Mitchell arose from. Being attacked as a pro-slavery person would have wounded her very deeply.

Is “Gone With the Wind” really racist? Let us know your thoughts in the comments section below?