Irish actress Fionnula Flanagan has enjoyed a career that not only spans decades, but also stage, film, and television. 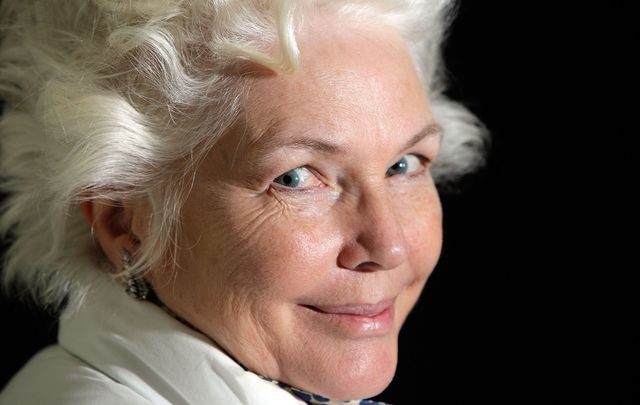 Fionnula Flanagan, one of Ireland’s most beloved actresses, was born on December 10, 1941 in Dublin. She and her four younger siblings grew up speaking both Irish and English, despite their parents not being fluent in Irish.

Flanagan studied at Fribourg University in Switzerland in 1962 and at the famed Abbey Theatre in Dublin from 1964-1966.

In Ireland, she had her first major break in acting in 1965 with her role as Maire in the RTE production of An Triail, an Irish language play. For that role, she received a Jacob’s Award for her “outstanding performance.”

In 1967, she portrayed Gerty McDowell in the film version of James Joyce’s classic ‘Ulysses;’ the Irish actress’s career would go on to include many more adaptations from Joyce’s works.

In 1968, the budding Irish actress left Ireland to try her luck at acting stateside. That year, she performed on Broadway in the Brian Friel-directed play ‘Lovers.’ She went on to tour that play nationally across the U.S., and while at a stop in Baltimore, she met Garret O’Connor.

O’Connor, also a native Dubliner, was working as a doctor at John Hopkins Hospital when he first met Flanagan. At the end of Flanagan’s tour of ‘Lovers,’ she and O’Connor settled in Los Angeles; the two married in 1972.

In 1973, Flanagan starred as Gerty MacDowell in Joseph Strick’s film version of ‘Ulysses,’ and the following year, played Molly Bloom in the Broadway production of ‘Ulysses in Nighttown.’

Well familiar with James Joyce, Flanagan wrote her own stage-adaptation of James Joyce’s ‘Women’ in 1977. The play featured Flanagan playing each of the six main women characters, all of whom had an impact on James Joyce's life, and toured the show from 1977 to 1979. In 1983, the production was optioned for a feature film adaptation. Flanagan wrote the screenplay and again played each of the characters in the film.

In 2010, Flanagan recalled her journey of writing 'Women': “When I first came to Hollywood, I could not break into movies. I was fed up with the limitation of episodic television and that was when I sat down and researched Joyce’s Women. It was a journey. I told myself that I didn’t care if it didn’t work or if I went broke. It was a hard row to hoe since I was so unknown.”

“I was lucky to have Burgess Meredith, the absolute sublime master of staging Joyce. He became my mentor and my director and that was wonderful. James Joyce’s Women gave me legitimacy, caused me to be taken seriously. It got my phone calls returned!”

Flanagan went on to enjoy great success in Hollywood after ‘Women.’ A fixture in both film and television, Flanagan is still acting today and has featured in such hits as ‘Waking Ned Devine,’ ‘The Guard,’ and ‘Divine Secrets of the Ya-Ya Sisterhood.’

On television, Flanagan had roles in ABC's 'Lost' as well as Showtime's 'Brotherhood,' about an Irish-American family in Rhode Island.

Aside from acting, Flanagan considers herself to be a “political junkie” and has previously said how she is “glued” to her television trying to keep up with political happenings.

In terms of Irish politics, she has aligned herself with Sinn Fein - she and her husband even hosted a welcome party for the political group’s former leader Gerry Adams when he first visited the US.

Flanagan's passion for politics sometimes blends into her passion for acting, in particular in her film 'Some Mother's Son' in 1996:

Speaking with RTE, Flanagan said: "The one I’m really most proud of is Some Mother’s Son, because it was about something that’s really a watershed in our history that I think we’re still having fallout in the north from that event, from the hunger strike."

In 2012, Flanagan was honored by the Irish Film and Television Academy with a Lifetime Achievement Award. She was presented the award by Irish President Michael D. Higgins:

Currently, Flanagan is back on stage in New York City starring as Aunt Maggie in the stage production of 'The Ferryman,' which is set in Northern Ireland during The Troubles era.

Check out Fionnula Flanagan sharing some of her best acting tips in 2018:

What's your favorite performance by Fionnula Flanagan? Share in the comments!