"Within a few short years the potential for a vote to end partition and unite Ireland is a very real possibility." 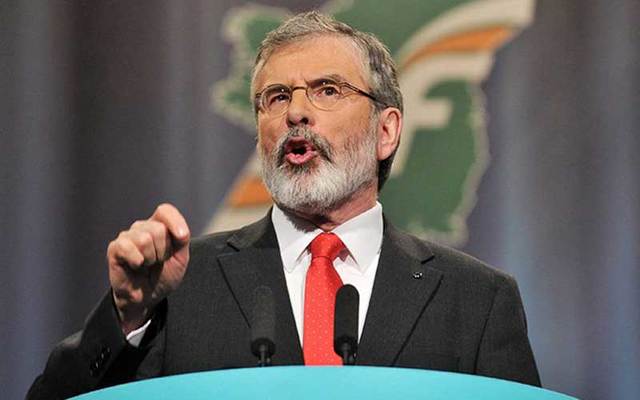 Sinn Fein president Gerry Adams has said partition will end in a few short years. He was speaking at a Sinn Fein conference in Belfast entitled “An Agreed Future.”

And he has called on nationalists to make a new effort to convince unionists a united Ireland is in their best interest.

"The Brexit referendum vote last year, the Assembly results in March, the Westminster election results this month and the census conclusions from 2011, are evidence of a shifting demographic and political dynamic in northern politics.

"Within a few short years the potential for a vote to end partition and unite Ireland is a very real possibility."

“We must ..consciously address the genuine fears and concerns of unionists in a meaningful way".

"We need a new approach, one which unlocks unionist opposition to a new Ireland by reminding them of their historic place here and of the positive contribution they have made to society on this island," Mr Adams said.

"Instead of concentrating on the negative aspects of our four centuries of shared history I suggest that we embrace the areas of agreement and of co-operation; of good neighbourliness and the common good.

"A truly united Ireland will emerge from the reconciliation of the people of this island based on equality."

"The reality is that in the four hundred years of their presence on this island Protestants and especially northern Protestants, have been woven into the narrative that constitutes the history of Ireland. While that narrative has been at times a troubled one it has also been dynamic," he said.

"So, we have a shared history - we will also have a shared future. Our task must be to ensure that it is a shared future which looks after every citizen, and in which everyone accepts the right of the other to be Irish or British - to be unionist or nationalist or republican," he said."It also demands that we look at what unionists mean by their sense of Britishness and be willing to explore and to be open to new concepts," he said.

"Hopefully as part of this process they too will be willing to explore what is meant by Irishness."

He added: "In particular, we need to address the future role of the Orange, its place in an agreed Ireland.

"Of course, that is a challenge also for the Orange and I invite their leaders once again to meet with Sinn Fein."