Donald Trump, Jr and Kimberly Guilfoyle, an Irish American, have been engaged for a full year but managed to keep the secret largely under wraps. 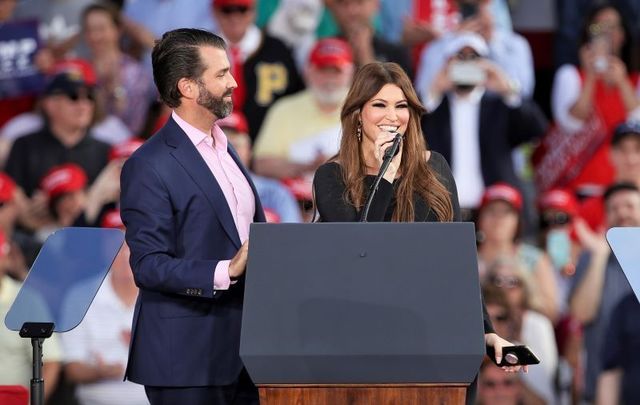 Donald Trump Jnr. and Kimberly Guilfoyle photographed at a MAGA rally in 2019. Getty

It seems that Donald Trump Jr and his fiancee Kimberly Guilfoyle, whose father is from Co Clare, are just great at keeping secrets, including the fact that they got engaged a whole year ago! Now the 8-carat diamond ring is out in the open after Don Jr proposed last New Year's Eve.

On January 1, Guilfoyle shared this Instagram post where you can see the dazzler on her ring finger:

A source recently told the Daily Mail: "Don and Kim got engaged on New Year's Eve 2020 - which is Don's birthday. They've been together for almost four years now and have been friends for 15 years.

"They've kept it private for the past year as they settled into life in Florida after moving from New York... Both are focused on their children - they have six between them - and their work."

A friend told the Mail: "It's been an open secret for the past 12 months with everyone Kim runs into admiring her almost 8-carat diamond engagement ring... The chatter about the engagement has increased since the engagement ring was seen on Don and Kim's Instagram accounts on New Year's Eve."

Don Jr. was previously married to model Vanessa Kay Haydon. They had five children together but announced their separation and divorce in 2018.

Don Jr and Guilfoyle have been a couple since 2018.

Guilfoyle has one son, Ronan, with ex-husband Eric Villency, who she was married to from 2006 to 2009. She was previously married to Gavin Newsom, the current governor of California, from 2001 to 2006.

Now the engagement's out in the open we're pretty certain an over-the-top wedding is in the pipeline.

Her mother was a special education teacher and a major inspiration for young Kimberly. She tragically passed away from Leukemia when Guilfoyle was 11. As the said in a 2015 interview with Mediaite: "My mother was just everything to me, I loved her so much, I always wanted to be around her. I loved how I saw people react to her. She was a warm woman who worked in education with people with emotional challenges. I got my sense of giving back and how when you have many blessings, pay it forward."

Her father, Tony, immigrated when he was in his 20s to the US from Ennis, County Clare in 1957, and served for four years in the US army, from 1958 to 1962. He then got into construction and became a real estate investor.

He passed away in 2008, and Guilfoyle has spoken profoundly about the lessons he taught her, along with her mother: “My late father Anthony Guilfoyle left Ireland in his 20s and went to work in America. He worked in construction in San Francisco and later became a contractor and political adviser.

"He was drafted into the US Army and stationed in West Germany. My mother, Mercedes, was a special needs teacher who died when I was a child. My parents worked hard to ensure we had a better life. They supported us and gave us the courage to pursue our dreams. I appreciate that greatly. My father was so proud of my achievements.”

Kimberly has a big love for Ireland and spent summers working there in her youth
Guilfoyle returned to her father's native town of Ennis every summer, working in her family’s local store.

“I was about 11 or 12 and I got about IR£10 a week. It instilled a sense of responsibility in me, putting in the hours, and earning the money."

Later in her life, Guilfoyle studied law at Trinity College Dublin. While there, she published research on international children's rights and European Economic Community law.