Irish tourist attraction of the week: Trinity College in Dublin

Though one of the most historic and popular locales in Dublin, Trinity College still has a few lesser-known spots worth checking out. 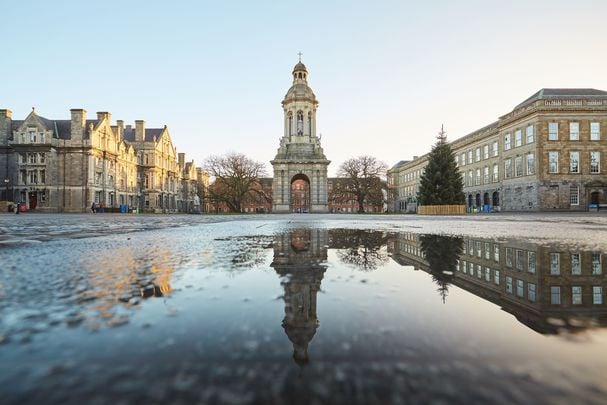 Trinity College, though one of the most popular tourist spots in Dublin, has plenty of lesser-known spots to check out

Though the glorious Trinity College Dublin stands proudly in the center of the city as a hub for Dublin’s tourists, the historic university is undoubtedly quite mysterious. As it was founded in 1592, a long, winding and sometimes dark history echoes through its halls, complete with curious locations, secrets, and tunnels buried far beneath the sparkling surface.

The revered Long Hall and Book of Kells aside, here’s a list of seven lesser-known secret spots or hidden gems in the college that wouldn’t be immediately recognizable to visitors. Some are hidden away and must be sought out, but others are perhaps recognizable and hiding in plain sight. Have you come across any of these in your travels? 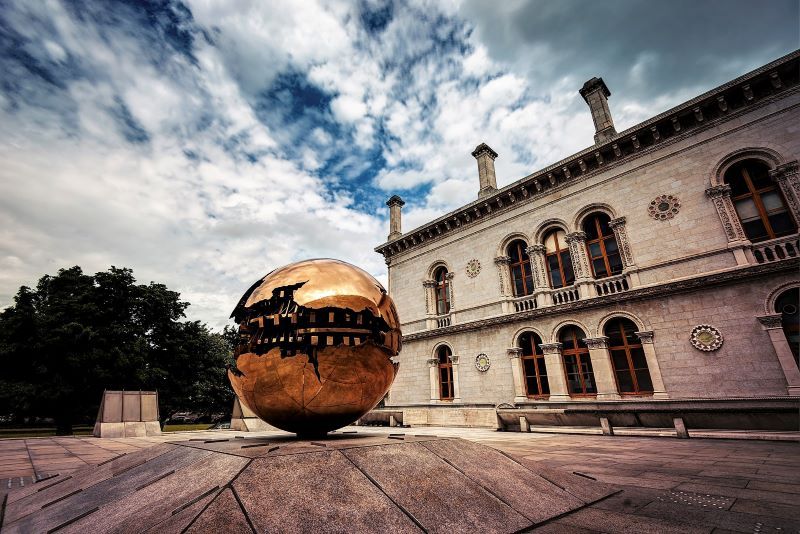 Trinity College Dublin’s Lecky Library, in the arts block, is reportedly linked to the Berkeley Library by an underground tunnel. Though the tunnel was opened in 1995, few can find the entrance or gain access.

During his time as provost, John Kearney, an ancestor of President Barack Obama, suggested connecting TCD with the parliament building across the street via an underground tunnel as well, but his request was refused by the government.

There are rumors circulating about several other connecting tunnels under TCD, such as the one linking the Provost’s house to Stephen’s Green, running beneath Grafton Street. Editor of Trinity News, Matthew Mulligan, went to explore this and reported a gated tunnel near the Provost’s Stables, accessible through the college’s arts block. 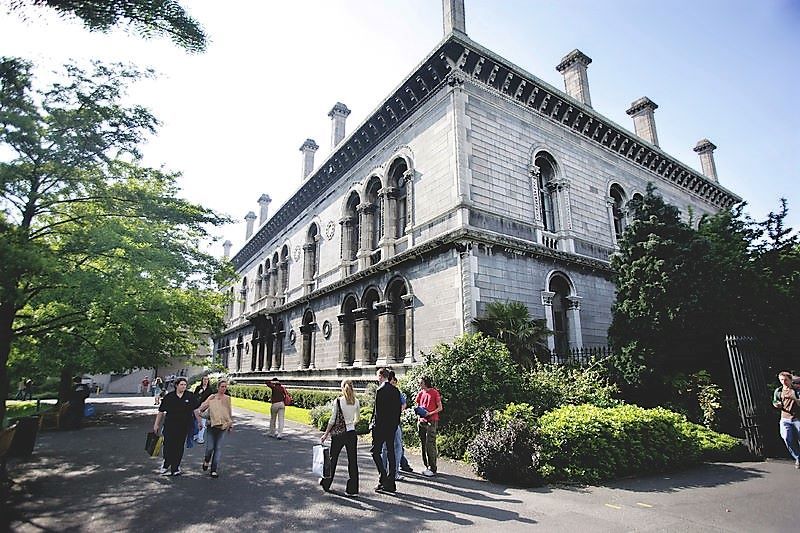 TCD’s Museum Building, beside the Berkeley Library, is a hidden gem in plain sight.

As Ireland’s first Venetian Gothic building, the stunning architecture might recall Venetian palazzi and the Byzantine style. Built between 1853 and 1857, the building is covered in beautiful carvings of flora and fauna – appropriate, seeing as it houses the Geology department.

The interior is equally stunning, with columns of Irish limestone, and an imperial staircase with a green Connemara marble rail. Definitely worth checking out if you have an eye for aesthetics.

The museum’s unique collection has about half a million specimens: most notable are the skeletons of two massive Irish deer. The majority of the collection has been recently moved to a different building, but the new location maintains the Victorian style of display. Fun fact: some of the artifacts have actually been used as theater props for stage plays around Dublin. 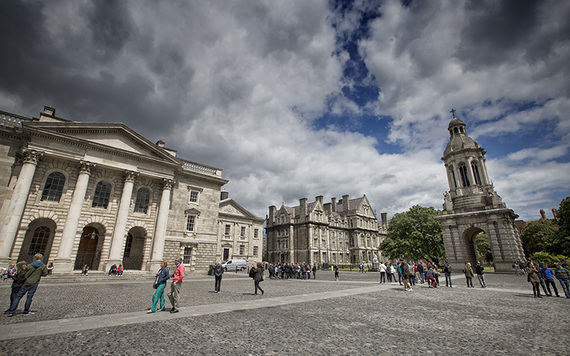 Could there be a secret tunnell under the Buttery, the center building here.

According to popular rumor, there’s an underground wine cellar under TCD’s Front Square, with a supposed entrance beside the college’s food hall, The Buttery.

According to Mulligan, a group of Trinity students in the 1980s discovered it beneath “House 10” on campus, and continued to regularly help themselves to bottles of aged wine before college authorities found them out and put a stop to it.

The wine cellar is thought to connect to the Royal College of Surgeons by a tunnel that was apparently used during the Easter Rising to transport ammunition. There’s a college-wide superstition that a select few students gain entry into the wine cellar each year on the night of Trinity Ball, before the festivities begin.

Trinity’s Zoological Museum, only open to the public in the summer months, is described by museum curator Dr. Martyn Linnie as “Dublin’s best-kept secret.” The over 200-year-old collection boasts 25,000 specimens, some of which are incredibly rare, making it a nationally important collection.

Some highlights include the only Great Auk in Ireland, a white-tailed sea eagle, a Tasmanian wolf, Blaschka glass models of marine life, and the skeleton of the Indian elephant named Prince Tom, who belonged to Prince Alfred, Duke of Edinburgh. Jenny Duffy of University Times writes that Prince Tom was known to have caused a big stir when he accompanied Prince Alfred on a journey to New Zealand. On the ship, he ate the same food as the crew, helped with the sails, and drank rum from the barrels. In 1872 he was housed in Dublin Zoo, where he was a star attraction; his most famous trick was buying his own snacks from the stands by collecting coins in his trunk and handing them over to the salesperson.

The museum is Ireland’s first accredited zoological museum. Dr. Linnie has emphasized the museum’s interactive nature, as visitors are allowed to handle some of the specimens, such as bones, tusks, or shark jaws.

You might recognize this room from the 1996 film Michael Collins, as it’s where the debate scenes were filmed. Though it stands right in TCD’s Front Square, the 1937 Reading Room one of the lesser-known buildings on campus.

It appears a bit mysterious, as you’ll often see people sitting on the stairs outside, but not many people going in and out. This is partially because the Reading Room is only for the use of postgraduate students.

The shape of the room is octagonal and was intended as a war memorial to honor the memory of TCD associates who fought in World War I, the names of whom are inscribed inside the room. Also inscribed is “NIKH,” alluding to Nike, the Greek goddess of victory. Another symbol of victory within are the laurel wreaths in the building’s upper section.

Amazingly rare books on the shelves at Trinity.

Another hidden gem is the Early Printed Books section in TCD’s Old Library. The very large and varied special collection of works offers literature catering to every person’s interests and houses some very rare collections, such as a 1623 first folio edition of Shakespeare’s plays, and an 1818 first edition of Mansfield Park by Jane Austen.

It also houses many old children’s books, including the entirety of The Pollard Collection, which includes over 10,000 books collected over a period of fifty years by Mary “Paul” Pollard, a former bookkeeper there. It also houses an original copy of “In Fairyland,” the 1870 masterpiece by Richard Doyle. Duffy writes that a trip to Early Printed Books is an adventure in itself: to get there, you must walk through a tunnel and climb a small, winding staircase.

There’s an online blog dedicated to Early Printed Books called Tales of Mystery and Pagination which has some interesting facts and tidbits about their collection. The blog says: “Besides all early printed books and pamphlets, Special Collections includes private press items, limited editions, signed books, Anglo-Irish literature, Irish Archival material and much else that is either valuable or vulnerable.” Inside Early Printed Books is an atmosphere of close community, with a staff that’s eager to take students or visitors around and assist them in their researches. 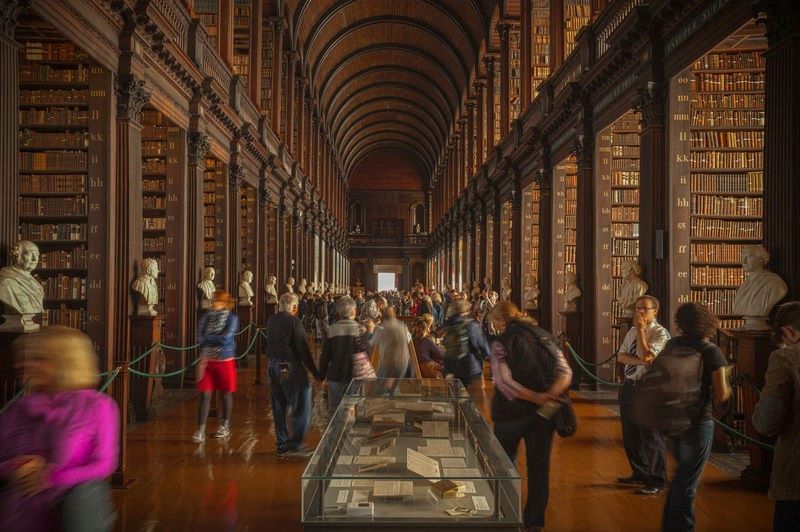 Trinity College Dublin’s library is a legal deposit library, which means that by law, it houses every single book that’s been published in Ireland and the UK since 1801 when legal deposit was established.

The collection is comprised of five million books and counting. Though most of the books have been transported to a different location known as “The Stacks” in the outer Dublin suburb of Santry, TCD tour guides have said that the books still housed in the library are organized in size order, with the smallest books on the top floor, because they’re the lightest. Irish publishers and distributors are required to deliver a print copy of each of their works to the Library of Trinity College Dublin under the terms of the Copyright and Related Rights Act, 2000.

Have you visited Trinity College in Dublin before? Tell us about it in the comments!