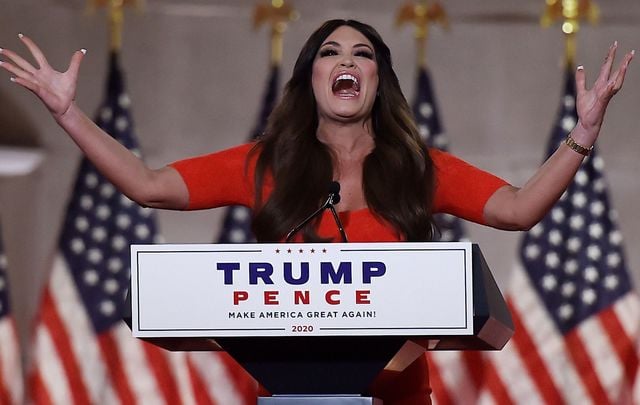 One of the speakers at the2020 Republican National Convention, here's everything you need to know about Kimberly Guilfoyle's Irish roots and more.

From summers in her father's native Ireland to a major law career to San Francisco's first lady, here's everything you need to know about Kimberly Guilfoyle.

Who were Kimberly Guilfoyle's parents and where were they from?

Her mother was a special education teacher and a major inspiration for young Kimberly. She tragically passed away from Leukemia when Guilfoyle was 11. As the said in a 2015 interview with Mediaite:  "My mother was just everything to me, I loved her so much, I always wanted to be around her. I loved how I saw people react to her. She was a warm woman who worked in education with people with emotional challenges. I got my sense of giving back and how when you have many blessings, pay it forward."

Her father, Tony, immigrated to the US from Ennis, County Clare in his 20s in 1957 and served for four years in the US army, from 1958 - 1962. He then got into construction and became a real estate investor.

He passed away in 2008, and Guilfoyle has spoken profoundly about the lessons he taught her, along with her mother: “My late father Anthony Guilfoyle left Ireland in his twenties and went to work in America. He worked in construction in San Francisco and later became a contractor and political adviser.

"He was drafted into the US Army and stationed in West Germany. My mother, Mercedes, was a special needs teacher who died when I was a child. My parents worked hard to ensure we had a better life. They supported us and gave us the courage to pursue our dreams. I appreciate that greatly. My father was so proud of my achievements.”

I was blessed to be raised by a truly amazing father. He was deeply compassionate and inspired me to always reach higher. Today, I am also blessed to be surrounded by some other really great fathers who also deserve to be celebrated today. ❤️

Guilfoyle returned to her father's native town of Ennis every summer, working in her family’s local store.

“I was about 11 or 12 and I got about IR£10 a week. It instilled a sense of responsibility in me, putting in the hours, and earning the money."

Later in her life, Guilfoyle studied law at Trinity College Dublin. While there, she published research on international children's rights and European Economic Community law.

Guilfoyle was a public prosecutor in San Francisco, worked as Deputy District Attorney in Los Angeles, and then returned to San Francisco as Assistant D.A. until 2004.

In that same 2015 Mediaite interview to mark the publication of her book Making the Case, she explained her drive to become a prosecutor was inspired by the loss of her mother:  "I became a prosecutor because I got my greatest joy in working with victims of violent crimes. I understood that profound sense of loss, and I could relate to it, and I wanted to do anything to help them heal by seeking justice.

"Wanting to make sure the person who wronged them or their family, that there would be closure. It’s so hard when you have a family member pass away, like cancer, it’s debilitating. But are you going to be mad at cancer? No."

In 2004, she decided to embark on a television career, moving to New York. She started out on Court TV and as a legal analyst for Anderson Cooper 360, and then moved to Fox in 2006 where she appeared regularly on shows such as The Lineup, The Five, and as a guest host on a number of other regular programs, until 2018.

She was married to Gavin Newsom, the current (Democratic!) governor of California

Guilfoyle and Newsom wed in 2001 when he was a city supervisor. He was elected mayor in 2003, shortly before Guilfoyle left for her new job in New York.

They divorced in February 2006, citing the pressures of a bi-coastal relationship, but she was San Fran's first lady for two years. The local media there has enjoyed speculating about how surprising it is to see her involved with the Trump administration now, and how Newsom, now Lieutenant Governor of California, is one of its most outspoken critics.

Guilfoyle has a 12-year-old son with her second husband

She and Eric Villency wed in May 2006, and their son, Ronan Anthony - very Irish names for her father - was born in October 2006. Villency and Guilfoyle announced that they were separating in 2009 and then legally divorced.

Guilfoyle has been linked to Don Jr. since shortly after the eldest first son’s official split from his wife in March 2018.

Trump Jr and Guilfoyle went public with their relationship in late June 2018 when they appeared in Montana together as Trump was to speak at the state's Republican convention in support of Senate candidate Matt Rosendale.

Trump Victory Finance Committee had a tremendous donor retreat last week. Great work by all the staff who worked tirelessly on behalf of @realdonaldtrump. New donors are flying in the door and longtime donors are doubling down to help deliver four more years! #MAGA #KAG2020🇺🇸 Throw back to b/4 quarantine 🙏

On the first night of Donald's Trump's 2020 Republican National Convention on August 24, Guilfoyle addressed the nation.

The conventions own line up described her as leading "the fundraising powerhouse between the campaign and the Republican National Committee as the National Chair of Trump Victory Finance Committee. She also serves as one of the campaign’s senior advisors."

Despite plans for vast rallies and mass gatherings, COVID-19 has put a kibosh on these plans for the 2020 Republican National Convention. The events are being streamed live from August 24 to 27

Here is Kimberly Guilfoyle's speech from the first night of the 2020 Republican National Convention: