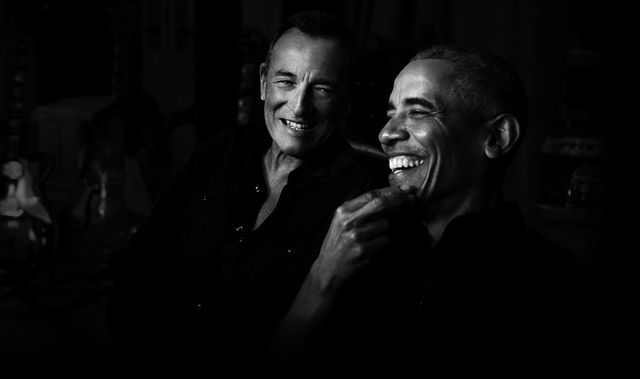 Barack Obama and Bruce Springsteen released the first two episodes of their new podcast series, Renegades: Born in the USA, on Spotify this week. The streaming platform describes the podcast as "Two dreamers, born in the USA. One friendship, made in America. Join President Barack Obama and Bruce Springsteen as they share a conversation on music, masculinity, and life in America."

The duo both promoted the launch on their Instagram page with a video promo showing them at a New Jersey recording studio discussing their childhoods when they first met as well as the current state of affairs in America.

The will be eight episodes in total in the series, produced by Michelle and Barack Obama's own production company, Higher Ground. The same production company is also behind Duke and Duchess of Sussex, Harry and Meghan Markle's podcast.

You can listen to the Renegades: Born in the USA podcast here.

Barack Obama and Bruce Springsteen both have strong Irish roots. It will be interesting to see if their shared ancestry comes up during their conversations.

While Barack Obama, the 44th president of the United States, was in office, he visited his ancestral home of Ireland and was welcomed with great fanfare.

In 2007, genealogist Megan Smolenyak traced then-candidate Barack Obama’s Irish ancestry on his mother’s side, eventually finding that his third great-grandfather, Fulmoth Kearney, left Moneygall, County Offaly for New York in 1850. He and his sister Margaret were bound for Ohio, where their father had inherited land from a brother. Other members of the Kearney family would gradually make their journey to America, but Fulmoth was the most recent immigrant on the maternal side of Obama's family.

Smolenyak's discovery was the catalyst for the Obamas’ joyous visit to Ireland in May 2011, during which the president raised a pint in Moneygall and gave his historic and poignant speech in Dublin.

Bruce Springsteen's family can be traced back to the early 19th-century in County Kildare. The Boss’s great-great-great-grandfather, Christy Gerrity, from Rathangan, was, in fact, a bit of a hell-raiser.

In 1823 Gerrity was arrested and imprisoned under the Insurrection Act, which targeted those protesting the social injustice of excessive tithes, rent payments, and related evictions of the time.

In 1827 he married Catherine Kelly. They lived in a simple mud cabin in the townland of Mountprospect and had eight children. Gerrity worked as a carrier transporting people, goods, and livestock, researchers at the Irish Family History Centre discovered. In 1853, due to the Famine, the family left Ireland for New Jersey.