A bronze statue of the former US President and First Lady now stands outside The Barack Obama Plaza in his ancestral home of Moneygall. 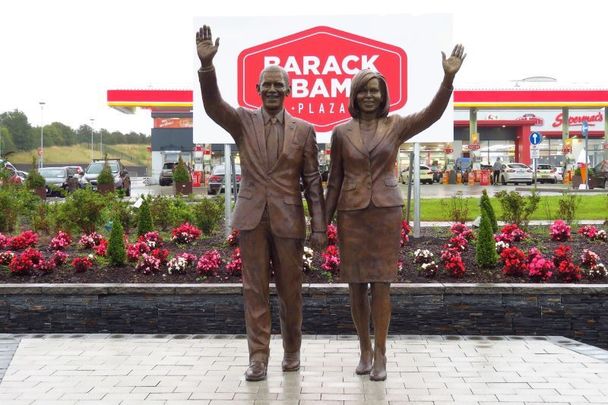 A new bronze statue of former US President Barack Obama and First Lady Michelle Obama has been unveiled in Co Offaly by the man who penned the 44th President’s famous “Is Féidir Linn” speech.

Cody Keenan revealed the statue during an event at The Barack Obama Plaza in Moneygall, Co Offaly, the ancestral home of the former president. Keenan was the speechwriter behind Obama’s speech in Dublin 2011 in which he declared “Is Féidir Linn,” an Irish language translation of his popular campaign slogan, “Yes We Can.”

The statue was created by sculptor Mark Rhodes, who also created a bust of Obama which is housed within the plaza itself.

In 1850, Obama’s great-great-great grandfather Falmouth Kearney, the son of the village shoemaker, left for New York in the aftermath of the Great Hunger when he was just 19 years old. He settled in Deerfield, Ohio, where he married Charlotte Holloway and they had several children.  Kearney’s final resting place was discovered in a cemetery in Kansas in 2014.

In May 2011, Moneygall was a hive of activity and the center of all Irish media attention as crowds descended on the Midlands town to witness US President Barack Obama and his wife Michelle sup on a pint of Guinness in the birthplace of his Irish ancestors.

Delighted to meet @codykeenan wordsmith extraordinaire as he unveiled a new statue of @BarackObama & @MichelleObama at the Barack Obama Plaza in Moneygall. Congrats to Pat McDonagh MD of @SupermacsIRE on a wonderful event & for his support for so many communities across Irl. pic.twitter.com/yTinKw2OsU

In tribute, the Obama Plaza visitor center now stands on the outskirts of the village showing mementos and photographs from the visit and remembering other US Presidents who shared strong connections to Ireland. It is managed by President Obama's eighth cousin Henry Healy who welcomed him to his ancestral home in 2011.