"From a personal point of view, this was the first real proper interaction with a non-binary person that I had in my working life. It was a real eye-opener for me." 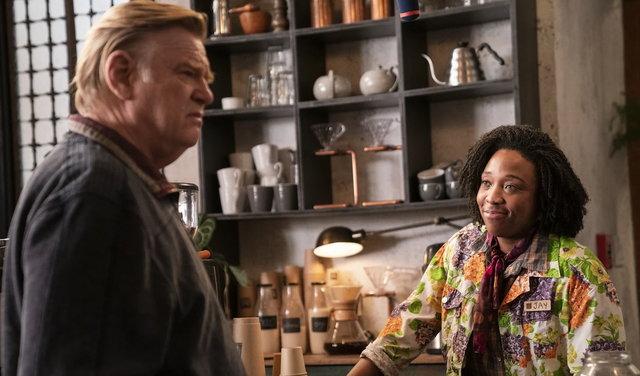 Brendan Gleeson and Esco Jouley in State of the Union.

Brendan Gleeson has had a terrifically successful showbiz career for decades, and his most recent role in the short form series State of the Union on Sundance TV was the first time he worked with a non-binary cast member, an experience he called eye-opening

Gleeson, 66, a Golden Globe winner, told Irish interviewer Ray D’Arcy last week, “From a personal point of view, this was the first real proper interaction with a non-binary person that I had in my working life. It was a real eye-opener for me.

"And just working with Esco I learned a huge amount. Most of which had to do with the fluidity of this whole area in terms of, if you’re looking for definites, you’re not going to get them.”

Esco is Esco Jouley, who plays a barista in the series that also stars Patricia Clarkson.  Episodes of State of the Union, in its second season, are only 10 minutes long, so they’re easy to consume.  Clarkson and Gleeson play an older married couple who’ve raised kids, survived infidelity and are now at a crossroads; Jouley is the asexual barista in the coffee shop where they attend pre-therapy counseling sessions.

“I found that tolerance by Esco, of me, incredibly liberating and we had a great time. I don’t do social media so I’m not aware of the rows that have been going on,” Gleeson told D’Arcy.

“I am new to the issue and there’s huge issues arising generationally. The generation gap is opening really widely again in a way that is quite distressing, and it’s not the only gap."

Season one of State of the Union starred Roscommon actor Chris O’Dowd and Rosamund Pike as a young married couple with troubles and was widely acclaimed.  The show is fast-paced, but Gleeson was well able to keep up.

"We were summoned to a kind of rapidity by our esteemed director, who kept us within limits," Gleeson said. "But there was a kind of vitality and a drive in the writing, anyway, that kind of insisted on that. And it was exhilarating.”

The New York Times gave the show a sterling review, recommending it for binge-watching.

“Union shines at its meanest, and it moves through a surprising range of dynamics in each brief installment. Your best bet it is to watch all 10 in a row, appetizers-for-dinner, ‘Mermaids’-style,” critic Margaret Lyons noted.

Check out the trailer for "State of the Union" series two here: