U2's Bono introduced the "Beautiful Day (FINNEAS Remix)" with an inspiring message for the Class of 2020 graduates. 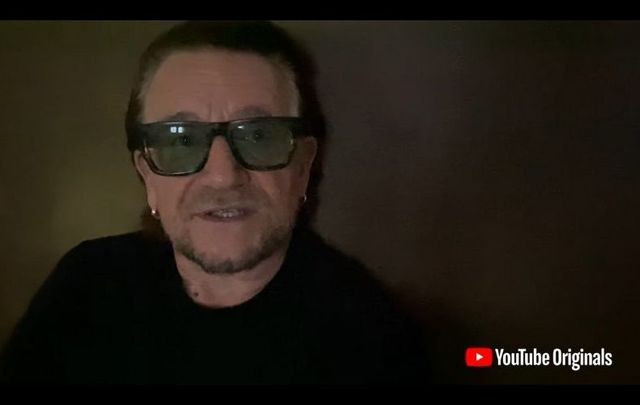 U2's Bono introduced the "Beautiful Day (FINNEAS Remix)" with an inspiring message for the Class of 2020 graduates. YouTube Originals, YouTube

Bono discussed the future of America in an introduction for the collaborative "Beautiful Day" remix, produced by FINNEAS.

Bono, the frontman for iconic Irish rock band U2, worked with one of his favorite producers FINNEAS to create a star-studded remix of the U2 hit "Beautiful Day" as part of YouTube's "Dear Class of 2020" live stream event.

FINNEAS - full name Finneas O'Connell - is a five-time Grammy award-winner and sister to Grammy winner Billie Eilish. In a May 2020 piece for Rolling Stone, Bono named "Everything I Wanted," written by the powerhouse O'Connell siblings, as one of the 60 songs that changed his life.

The "Beautiful Day (FINNEAS Remix)" was featured as part of YouTube's Dear Class of 2020 four-hour live stream event, a virtual commencement celebration that brought together inspirational leaders, celebrities, and YouTube creators to celebrate graduates, their families, and their communities, which aired on June 7.

In an introduction for the "Beautiful Day" remix, Bono gave a message to this year's graduates, who largely saw their commencement ceremonies canceled or postponed due to the coronavirus pandemic.

Bono said: “As an Irishman, I have always believed that America is not just a country, it’s an idea, it’s a dream that belongs to the whole world.

“Now I know in recent times the world has been reminded that America is an idea that doesn’t even belong to a lot of Americans. And that for many black Americans, Lady Liberty’s torch is far from a beacon hope, it’s often a flashlight in the face.

“Now there were stormclouds over Dublin when U2 recorded ‘Beautiful Day,’ things were not as they might been. But the song was not a description of where we were at, it was a prayer for where we could go and a dream, like America’s a dream of what might be.

“We now know that America is a song yet to be written. America might be the greatest song the world has never heard. It’s a wild thought, that America is yet to exist. And even wilder that the class of 2020 may be the very people who bring it into being.

“After 244 years striving for freedom - sometimes marching, sometimes protesting, sometimes on your knees, sometimes taking the knee - you get there. I don’t know how, but I know who. You, you can vault the barricades of bigotry and with your vote, you can dismantle institutions that uphold that bigotry and are in your way.

“You can enter America, we will all enter with you. But it’s going to be you, that is going to be a beautiful day.

“Finneas O’Connell and some of the most extraordinary voices on the planet to sing that song.”

Check out Bono’s address and the “Beautiful Day” project from Finneas O’Connell here: