Jerry Mulvihill is penning a script to tell the story of the Famine through the eyes of Nicholson, who spent four years living in mud huts among Ireland's poorest. 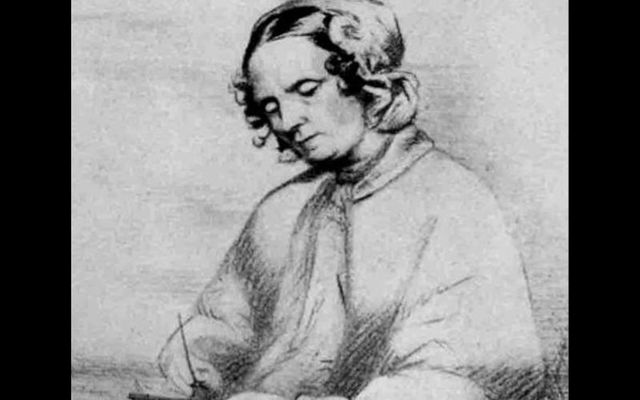 An Irish author is working to produce a movie about Asenath Nicholson, an extraordinary American woman who saved multiple lives while living in Ireland during the Famine.

Jerry Mulvihill, whose illustrated book "The Truth Behind Irish Famine" showcased the horrors of the Great Hunger, is penning a script to tell the story of the Famine through the eyes of Asenath Nicholson, who spent four years living in mud huts among Ireland's poorest.

Mulvihill described Nicholson as an "extremely selfless person", who set up boarding houses in New York to help the poor in the early 1840s.

Nicholson met many Irish immigrants while running the boarding houses and became fascinated by their story, prompting her to travel to Ireland in 1844. one year before the beginning of the Famine.

She spent a year traveling the country and gave a prescient warning that Ireland was on the brink of catastrophe because the poorest people were barely surviving on potatoes.

Nicholson had traveled onward to Scotland by the time blight had arrived in Ireland, marking the beginning of the Great Hunger.

After reading about the Famine in Scottish newspapers, she quickly returned to Ireland and traveled around the country, initially staying with some of Ireland's richest people in manor houses thanks to connections she had in New York.

"She quickly realized that she just didn't agree with how they saw the Irish," Mulvihill told IrishCentral. "They were quite lavish and indulgent; they were drinking wine and eating meat. She got into some heated debates with them. She just realized that the reason she was there was to help the poor and that she was better off staying in the mud huts."

Mulvihill described Nicholson as a "remarkable" woman, who didn't have much money, which makes her story almost unbelievable.

"People would imagine that she was a wealthy woman and that's what gave her the privilege to travel. But she literally didn't have much from day to day. People took her in and she relied on the goodwill of the people."

Nicholson wrote to newspapers in the US, namely the Emancipator and the Tribune, who sent money over to her.

She kept a tiny amount of that money for herself, keeping just enough to afford cocoa and one piece of bread per day, and gave the rest to families in need.

Mulvihill told IrishCentral that Nicholson preferred not to spread the money thin among dozens of starving families and instead favored giving a few families a significant amount of money to help save them.

A Protestant, Nicholson used to carry a Christian bible so that local Catholics wouldn't be suspicious of her help.

Mulvihill believes that Nicholson, who visited workhouses, soup kitchens, mud huts, and mass burial sites, is the perfect person to tell the horrific story of the Irish Famine through.

Nicholson kept two diaries of her time in Ireland during the 1840s and many of the scenes that Mulvihill has written are based almost entirely on those journal entries.

The Kerry native said he is close to three-quarters of the way through writing the script and aims to have the script completed and edited by next summer when he will begin to shop it around to studios and directors. He said he has already received interest from various directors and film boards and added that he wants to "aim big" with the project.

Mulvihill's research into Nicholson's fascinating life has taken him to her final resting place in Greenwood Cemetery in Brooklyn, New York.

With the help of Greenwood Cemetery worker Jhon Usmanov, Mulvihill located Nicholson's final resting place in January 2022 and commissioned a headstone to mark the location.

"The work she did in Ireland was incredible. She absolutely did save multiple lives," Mulvihill said, explaining his decision to commission the headstone.

He added that a photograph of the headstone has been added to Google Maps, allowing people to easily find her grave in the sprawling Brooklyn cemetery.

Mulvihill said Nicholson was an "eccentric" character who "seemed to stand for everything that was right.

"She used to be a part of the anti-slavery marches in New York. She desperately wanted to meet Daniel O'Connell because she really admired that he wouldn't shake the hands of any slaver.

"She was just a real activist who was ahead of her time. She was very humble and didn't want to appear in the newspapers at the time. It was unbelievable to me that a person like that could be laying in an unmarked grave in Brooklyn. I really just wanted her to get recognition." 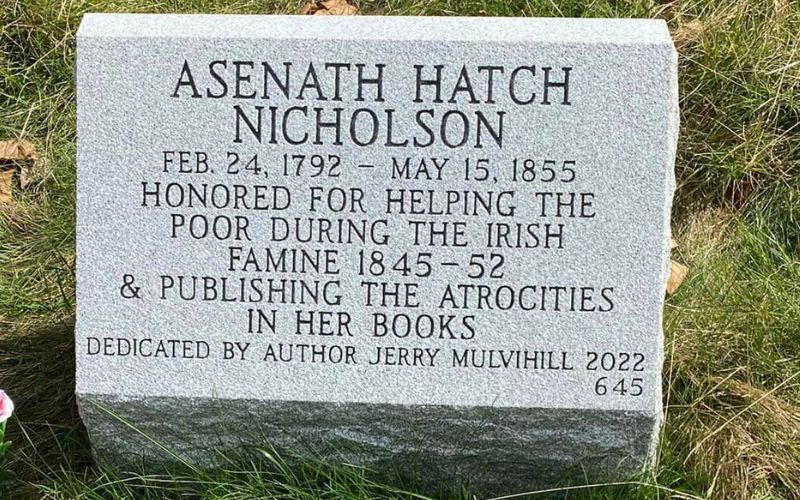 Mulvihill has also commissioned a painting of Nicholson alongside her friend Father Theobald Mathew, who kickstarted the temperance movement in Ireland in the 1800s. When completed, the painting will be the first colorized depiction of Nicholson in existence.

He has additionally commissioned a stone bust of Asenath, which will go on display during Mulvihill's exhibition of the illustrations and drawings featured in his book.