We visited the beautiful grounds of the working cemetery to learn more about the history of the extraordinary Irish people who made it their burial place. 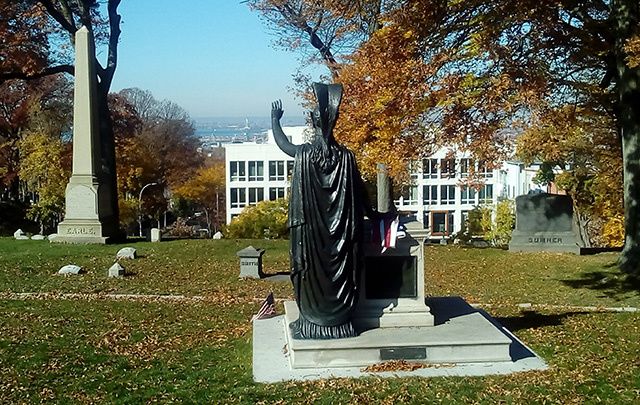 The history of the Irish in New York is well known and well visited, from St. Patrick’s Cathedral on Fifth Ave to the Great Hunger Memorial in the Financial District. It is off the island of Manhattan, however, that one of the city’s greatest treasures for Irish history can be found: Green-Wood Cemetery in Brooklyn.

We visited the beautiful grounds of the working cemetery to learn more about the history of the extraordinary Irish people who are buried there.

Keeping watch over New York harbor from one of the last hills in Brooklyn before the borough’s flatlands, the statue Minerva proudly salutes her compatriot Lady Liberty. Although Minerva, the Roman Goddess of battle and war, may not be as well known to tourists as the Statue of Liberty, for many decades the two iconic women have stood firm at the entrance and exit of many an Irish immigrant’s time in the United States.

For while Ellis Island and the gateway to the Free World lies under the gaze of the statue in the harbor, it is the immigrant’s final resting place in Green-Wood Cemetery, Brooklyn, that falls under the care of Minerva.

The bronze Minerva was unveiled on August 27, 1920, on the highest natural point in Brooklyn, Green-Wood’s Battle Hill, from where Minerva can take in the spectacular views of the harbor, New Jersey, and lower Manhattan.

The date marked the 144th anniversary of the Battle of Brooklyn: the first battle of the Revolutionary War to take place after the Declaration of Independence, the largest battle of the war, and a disastrous loss for the Continental Army under George Washington. Despite the significance of this location in American history, Minerva was the first real marker declaring that Battle Hill had been a key point of action.

Her arrival in Green-Wood was the passion project of one man – Charles Higgins, who had made his fortune in Brooklyn filling fountain pens with Higgins India Ink. He is buried today over his bronze statue’s shoulder, behind a tomb door holding tens of Irish and US flags. For despite what his dedication to honoring American history, Higgins was an Irishman.

To think of a man born in Ireland making his way to New York and finding such success that he could buy a family plot on Battle Hill (and erect a bronze statue and Altar of Liberty in front of it) is to be reminded of the classic notion of the American Dream. While Higgins may have achieved great things in Ireland, his American success story is typical of those of his fellow countrymen and women buried in Green-Wood, scattered among the cemetery's 570,000 graves spread out over 500 acres.

Among them lie rebels, soldiers, actors, bankers, congressmen, mining magnates, businessmen, and journalists, yet one of the greatest Irishmen paid tribute to within Greenwood's magnificent walls does not lie in the cemetery’s soil at all.

Irish nationalist and leader of the Young Irelanders during the 1848 rebellion, Waterford-born Thomas Francis Meagher was deported to Tasmania, Australia, for taking up arms against the British. He didn't remain imprisoned for long, for he escaped and made his way to America.

After playing such an important role in Irish history, he was to force his way into the American history books, becoming a hero of the Union Army during the Civil War.

Meagher settled in New York and worked as a journalist before he joined the federal army at the outbreak of the Civil War. He rosethrough the ranks to brigadier general and, notably, recruited and led the Irish Brigade. Following the war, he was appointed acting governor of the Montana Territory but in 1867 drowned in the swift-moving Missouri River after falling from a steamboat. His body was never found.

Meagher's wife Elizabeth Townsend Meagher went to her grave hoping that one day they would be buried side by side. It was not to be, but in 2007, a successful fundraising campaign meant that a stone could be erected over the empty space where his body should have lain.

“As part of our Civil War project research, I went through the Brooklyn Eagle and discovered that his widow [Meagher’s] is here and that she had gone to her grave lamenting that he [Meagher] had no final resting place because his body was never recovered,” said Jeff Richman, the resident Green-Wood historian.

“So we got a cenotaph from the Department of Veterans Affairs for him and now the Co. Waterford committee is working on a bronze bust portrait of him which is going to go out there July 1, the 100th anniversary of his disappearance.”

Richman is only the second historian to work in the cemetery, although walking tours have been on offer since 1865.

Up until recently, Meagher was not the only Young Irelander whose final resting place was unknown, however. When the Waterford man stood in the dock tried for treason after his unsuccessful rebellion, by his side was one Patrick O’Donoghue. O’Donoghue was also exiled to Tasmania.

O'Donoghue established a paper in Australia that displeased the authorities and once again found himself in custody. He was placed in a chain gang, set to hard labor that severely damaged his health.

As with Meagher, O'Donoghue escaped with the help of Irish sympathizers and made his way to San Francisco before he eventually settled in New York. While Meagher has been remembered in America thanks to for his Civil War actions, O’Donoghue was forgotten after he died in New York in 1854. He is buried, of course, in Green-Wood Cemetery.

It was there he remained in ignominy, his headstone covered over by decades of dirt, until recent ground work in the cemetery looking for the graves of Civil War soldiers came across his stone, inscribed forever with the words “Irish Rebel.”

The wife of another Irish hero is also to be found in a different part of Green-Wood, a cemetery so vast that a car is required to travel between some of the various Irish graves to save time. (Although for those with more time on their hands, walking down the nature-named trails is as good as any excursion to Central Park).

Matilda Wolfe Tone was the wife of the founder of the United Irishmen and leader of the 1798 rebellion, Theobald Wolfe Tone, often regarded as the father of Irish republicanism.

While Wolf Tone himself is buried in his native County Kildare, Matilda was reinterred in Brooklyn from Washington D.C. in 1996 and now lies alongside their son William Theobald and his wife Catherine, as well as her parents: the controversial civil rights attorney William Sampson (himself born in Co. Derry) and his wife, Grace.

First opened in 1838, Green-Wood, a National Historic Landmark, was one of the first “rural cemeteries” and while it became hugely popular and continued to function as a cemetery, the gates were not always open to visitors – it was closed to most people up until the 1980s.

“In the 80s our board became more intent on growing the endowment and we became more serious about maintaining the place,” said Rich Moylan, President of the historic cemetery.

“Then we realized that we couldn't keep turning people away as we come to the end of our life as an active burial ground, which is not that far off. I mean, we'll be burying for a long time still but we're almost at the end of actively selling burial places and when that happens people naturally will stop coming here to visit.

“We still do 1,200 burials a year and 2,300 cremations so there's still a lot of grieving families coming here and we do our best to make sure that they’re insulated from any of the ‘entertainment’ things that we do.”

The North Gate into Green-Wood.

Green-Wood Cemetery hopes to emulate Glasnevin Cemetery in Dublin by building its own visitors center that will cater for those keen to learn about the incredible people buried in this part of Brooklyn.

Far from the dark days when the cemetery was trying to protect itself from vandalism, local New Yorkers and tourists alike are now free to stroll through the grounds and visit any relatives or to enjoy the nature of this idyllic resting place, designed to create a religious experience of having left the everyday world through its flowers and trees.

“Our vandalism was back in those ugly days of New York and the more we tried to keep people out, the more that we had professionals stealing Tiffany windows and stealing bronze doors to melt them down,” Moylan added.

“Now, it doesn't really happen. I've always thought the more you welcome people, the less of that you're gonna have.

“It creates other problems, of course, with the volume of people but the more attention these things are given the better. That was one of the arguments of the guys who was stealing the windows. He was doing a good deed, that nobody was seeing them!”

You can find more on Green-Wood cemetery here.