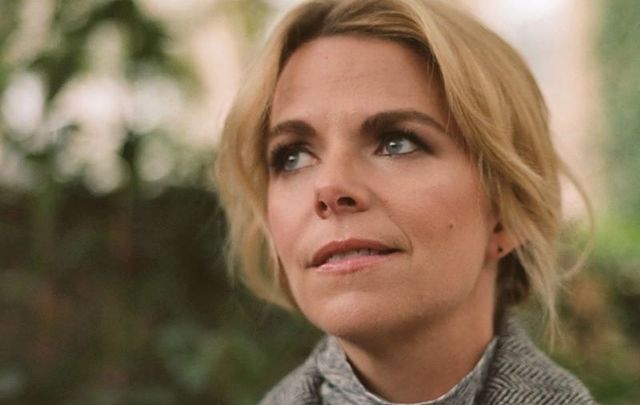 Aoife O’Donovan, a Grammy-winning Irish-American singer-songwriter, performs her "Bull Frogs Croon" suite and "Lakes of Pontchartrain" alongside a string quartet for WGBH.

Aoife O'Donovan's string quartet performance that was filmed on March 12, and later premiered on both WGBH and IrishCentral on April 7. You can watch back on the stunning performance here:

Come hang with GRAMMY-winning singer-songwriter Aoife O'Donovan next Tuesday night as we premiere her never-before-seen string quartet in-studio set at WGBH right here on Facebook! 🎤🎻🎶 Aoife will join us in the live chat when the concert kicks off at 8:30pm sharp so save the date with a reminder, clear your calendars and bring your best Q's! We can't wait! See everybody then.

Aoife is the daughter of Co Cork native Brian O'Donovan who hosts WGBH’s "A Celtic Sojourn" radio program and is the founder and producer of several live Celtic variety shows.

In a Facebook post, Brian O’Donovan wrote: “There are moments that loom large in our lives for many different reasons. Thursday, March 12th will be a day I will never forget.

“The night before in Rockport, we had launched what would have been our yearly St. Patrick's Day Celtic Sojourn series of six concerts. The alarm around the spread of Covid was intensifying and we were fully expecting impact, waiting to hear from CDC, Washington, and our Governor on what would happen next. Things had changed dramatically between our leaving Rockport that Wednesday night, and Thursday morning.

“The moment I woke up on that Thursday, I decided to cancel the rest of the series. Sports leagues, the BSO, Broadway, and Boston's own jewel of Performing Arts presentations, The Celebrity Series of Boston also announced they were shutting down.

“Celebrity Series was to present Aoife originally scheduled for Sanders Theatre that night. She had launched her tour on Wednesday night in Connecticut and was on her way to Boston for this in-studio appearance. WGBH was still fully open, and everything was ready for the shoot, so it went ahead. Because we were meant to perform in Worcester that night, I had not expected to be there. But because of the cancellations, I could.

“It was a singular performance against the ominous backdrop of the pandemic. There was a palpable feeling that something profound was happening outside of our Fraser Performance Studio. But for this short morning, with a handful of musicians, and our amazing crew at GBH, something wonderful and momentous, happened. And the handful of us in the room felt it viscerally. Only when we emerge and look back without our current fear and anxiety will we be able to fully absorb what this was. A huge thanks and congrats to Greg Shea and everyone at Front Row Boston for making this happen and the quick turnaround. Hope to watch with you."

O’Donovan shared a teaser of the performance on her Instagram page:

🐸 Join me tonight at 8.30p ET on @wgbh facebook for the premiere of the first live session performance of the "Bull Frogs Croon" suite + "Lakes of Pontchartrain". We taped this March 12th at WGBH's Fraser Performance Studio in Cambridge. I’ll be on to chat about music too!💚

Aoife O’Donovan’s sophomore album, “In the Magic Hour” — produced by Tucker Martine (The Decemberists, Neko Case) is a 10-song album full of the singer’s honeyed vocals mixed with gauzy, frictionless sounds: splashing cymbals, airy harmonies, the leisurely baritone musings of an electric guitar. Written in the wake of O’Donovan’s grandfather’s death, “In the Magic Hour” is her most introspective effort yet, an aching exploration of memory and mortality.

For a decade, O’Donovan wielded her instrument with tensile strength as the captivating lead singer of the Boston-based progressive string band Crooked Still. She was a featured vocalist on “The Goat Rodeo Sessions,” the Grammy-winning album by Yo-Yo Ma, Stuart Duncan, Edgar Meyer, and Chris Thile, has made regular appearances on A Prairie Home Companion and collaborated with some of the most eminent names in music across a wide variety of genres from Alison Krauss to Dave Douglas

In 2013, O’Donovan released her debut solo album, “Fossils,” a moody collection of original songs with a country lilt. The album garnered praise from The New York Times and Rolling Stone, while The Guardian deemed O’Donovan the “next Americana celebrity.

Most recently, O’Donovan has lent her voice to the folk trio I’m With Her with singers Sara Watkins (Nickel Creek) and Sarah Jarosz. In 2019, the trio's song "Call My Name" won the Grammy for the Best American Roots Song.