Will Trump dye his hair Emerald Green? All the odds for Trump's visit to Ireland

The imminent arrival of Donald Trump in Ireland has prompted Irish bookmakers Paddy Power to offer odds on what he will get up to during his visit. 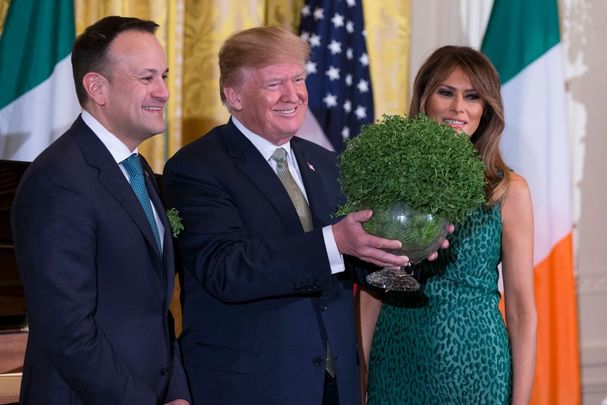 The imminent arrival of Donald Trump in Ireland has prompted Irish bookmakers Paddy Power to offer odds on what he will get up to during his visit.

Irish bookmaker Paddy Power has given odds on what Donald Trump will do during his visit to Ireland, with markets ranging from the mundane to the utterly bizarre.

The US President will be visiting Ireland for the first time since winning the presidency when he visits his resort in Doonbeg on Wednesday and almost everyone is in the dark about what he plans to do on his short visit.

Ireland’s biggest bookmaker expects his wife Melania to sport a green dress while in Ireland, giving odds as short as 1/3 that she will do so. They are less expectant, however, that the US President will mimic his wife and don a green tie, with the longer odds of 11/10 being assigned to the market.

The bookmakers believe that Trump will follow in the shoes of his predecessor Barack Obama and be photographed drinking a pint of Guinness on his visit, offering 1/2 that he will be seen drinking the black stuff.

It is EVENS that Trump will attempt to earn favor by attempting to use the Irish language in one of his speeches and 4/1 that he will be photographed with a hurl.

Among the more outlandish markets are the prices on the US President to fall off a swing while visiting the Emerald Isle – a nod to Maria Bailey TD’s recent controversial lawsuit – and Trump to dye his hair green for the visit. Both markets are priced at 250/1 and 200/1 respectively.

At 150/1, punters can back Trump to pardon all illegal Irish immigrants in the US or they can back him to be seen dancing at Queens nightclub in Ennis.

A spokesperson for Paddy Power said, “President Trump has kept much of the details of his private visit to Ireland under wraps, so his activities while he’s here are about as predictable as his outbursts on Twitter over the past 24 hours – anything could happen. We are looking forward to watching how things unfold though. With so many protests planned, it could be a stormy few days for the president.”

What do you think the US President will get up to while in Ireland? Let us know in the comments.