Lilian Cox and Doris Hobday, thought to be the oldest living identical twins in Britain, says Guinness is one of their secrets. 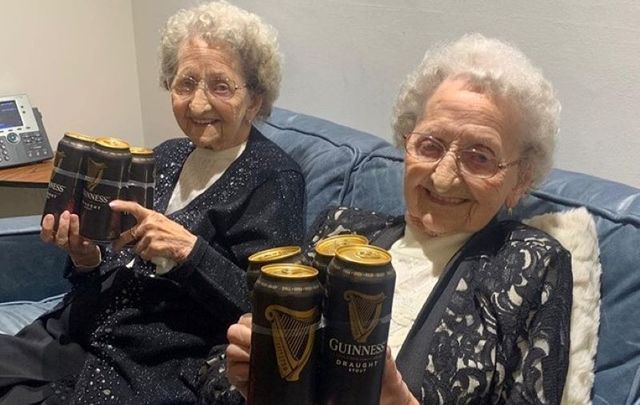 95-year-old 'Tipton Twins' says Guinness is one of their secrets to a long life. Lil & Doris, Facebook

The Tipton Twins, 95-year-olds Lil and Doris, said “plenty Guinness” was one of the secrets to their long and happy lives.

Read More: Grandmother who drank a Guinness a day dies at the age of 100

Lilian Cox and Doris Hobday appeared on the British talk show ‘This Morning’ on Monday to chat about their long lives, which they thank no sex, plenty of Guinness for.

The duo, who was born in 1924 and grew up in Tipton, is thought to be the oldest living identical twins in Britain and have recently launched social media channels that are run by Lil's granddaughter Kerry.

Their Facebook page says: "Their favorite food is fish & chips and favorite drink is Guinness."

When asked on 'This Morning' what their secrets were, Lil replied without hesitation: "no sex and plenty of Guinness."

Read More: 92-year-old actress says she will never give up drinking Guinness

After their 95th birthday in July, Lil’s granddaughter Kerry said: "They're lovely. They enjoy playing bingo and going to the theatre.

"They're very independent. They live in a warden-controlled block but they've never pressed the button for help in two years.

"They catch the bus to do their own shopping and don't even use walking sticks."

Following their appearance on ‘This Morning,’ the Tipton twins were delighted to receive a gift from the show’s producers - cans of Guinness!

Just got back to the dressing room - how special do we feel! And the lovely team at @thismorning got us a present each @GuinnessIreland #keepsusyoung Thankyou so much  pic.twitter.com/e0BIIlrCM5

You can watch the charming Tipton twins discuss their love of Guinness here: