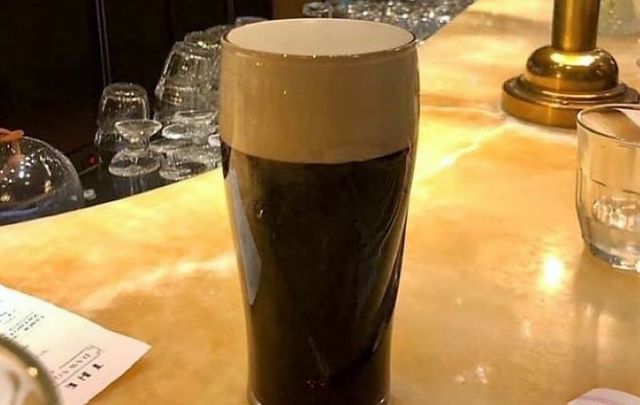 @ShiteGuinnessAlertNYC is a bit of banter, says the account’s owner

Any self-respecting Irish person knows that pouring a proper pint of Guinness is an art form. In fact, Guinness themselves have hard and fast rules on how to pull the perfect pint.

However, it seems that not every bartender has copped on just yet.

One Irish person, who does not want their identity revealed as they "don't want to get banned from all the pubs in NYC!," has been documenting the shite pours of Guinness they've been served in their adopted home of New York City.

“For the past few years, myself and some friends would text each other horrific pints we’d been served," said the owner of Instagram account @ShiteGuinnessAlertNYC, which is partly inspired by the massively popular @ShitLondonGuinness.

“It’s only for fun," the account's owner says, "but it is our hope that it encourages bar owners to respect the traditions that go along with a good pint of Guinness, and maybe, just maybe, clean their lines more often!”

He added: “The goal is not to affect any pub’s business. I recognize lots of local Irish pubs here in NYC do amazing charity work, fundraisers for local families who fall in hard times, have medical bills to pay, etc, so it’s just some banter at the end of the day.”

As such, he refuses to name where in NYC he was served the most shite pint of Guinness, but he does share this particular horror tale that led the page's very first post back in November: “I once witnessed an Irish bartender pour a completely flat pint of Guinness and stir it vigorously with a straw right before serving to generate a head. Sacrilege!”

@ShiteGuinnessAlertNYC is primarily focused on New York City bars, but the owner of the account says they’ve received submissions from all along the east coast as their popularity grows, including this travesty sent in from Florida:

Of course, it’s not just shite pints that get featured on the account - credit where credit is due, as evidenced in this lovely shot:

So what makes a non-shite pint? “My dad always says, you should be able to see on the side of the glass every point where you took a sip. So the white has to be all the way down, with lines where you took a drink.

“A head that approaches the gold harp on the pint glass in a no-no. Any bubbles in the head is a bad sign also!”

The pub itself is also a good indicator of the Guinness: “If you look around a pub and everyone is drinking Guinness, it’s usually a good sign.”

Where do you go in New York City for the best pint of Guinness? Let us know in the comments!