This flock of sheep in Co Kerry has found themselves a new leader of the pack - Irish woman Elaine Duggan's pup Teddy! 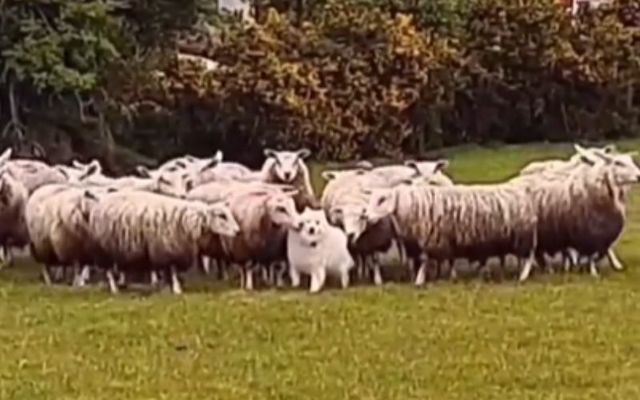 Video of an Irish pup named Teddy playing follow-the-leader with a flock of sheep in Tralee, Co Kerry is warming hearts across the Internet.

Irish woman Elaine Duggan shared the smile-inducing video on her Instagram on May 12 and it has since gone on to be picked up by several Irish news and media and outlets.

Elaine, who told IrishCentral that she and her husband Barry "absolutely adore" 8-year-old Teddy, said that she and her trusty pup were out in Farmers Bridge in Tralee, Co Kerry where her family's farm is based when the scene unfolded.

Elaine said: “We were walking up the field to meet my sister’s new baby foal. I instructed Teddy to remain at the gap as I didn't want him coming into the field getting all muddy.

“So when I turned around halfway up the field, this is what we saw - instead of staying at the gap, he struts his way up the field to us, oblivious the sheep were even following him initially!

“They are very taken with him every time they meet him - we have two sheepdogs on the farm also but the sheep run away from them!

“I think with Teddy they think he's one of them, a small sheep!”

For her Instagram video of Teddy with his new flock, Elaine added 'Staying Alive' by the Bee Gees, as well as the hilarious caption "Ted drawing the ladies as usual!"

Elaine told IrishCentral: “I only put it up on my Instagram story thinking it was funny just to us, but I nowhere near expected the huge response I got - people love it!”

She added: “I think in these difficult times people are looking for some comic relief and what better way to do it than with furry animals!”

Indeed, we’re all in need of a cute Irish animal video, aren’t we?!

You can check out the precious video of Terry with his new flock in Co Kerry here, courtesy of Elaine Duggan: