Has any other US President loved St. Patrick's Day as much as Ronald Reagan? We think not! 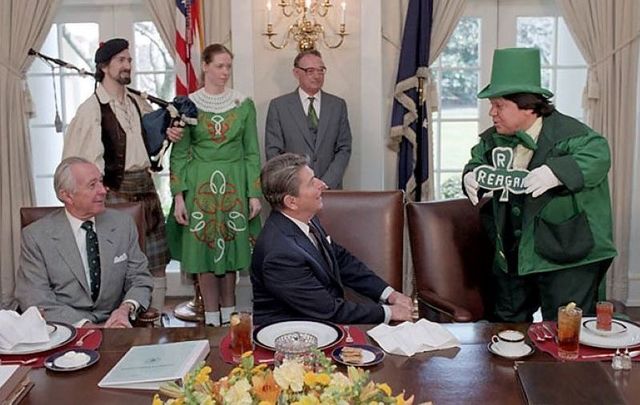 Irish American President Ronald Reagan always made sure the White House had a bit of craic for St. Patrick's Day.

Long, long ago, and long ago it was, as the Irish storytellers begin a major yarn, there was a US President who had more fun on Saint Patrick’s Day than any president in history: Ronald Reagan.

Today, in President Reagan’s presidential library in Simi Valley, CA, his actual Air Force One holds pride of place, but right behind that significant plane is the Ronald Reagan Pub, which Reagan had transported brick by brick from his ancestral home of Ballyporeen in Co Tipperary.

On his trip to Ireland in 1984, the President drank Guinness with a priest in the aptly-named Ronald Reagan Pub and reminisced fondly about his Irish roots.

President Reagan was an Irish storyteller par excellence, but some of the antics on St.Patrick’s Day would be hard to match.

In 1986, it was actual "leprechauns" who made their appearance during a cabinet meeting. Reagan was laughing so hard he didn’t notice one had crawled into his lap and another had pretended to shoot him.

All good fun, except for the Irish Ambassador who looked aghast!

Then, in 1988, there was the St. Patrick’s Day bowler hat he wore during the day. Dressed otherwise in his always impeccable suit and tie, the President's jaunty green hat would have made a cat laugh, which was truly the intention. 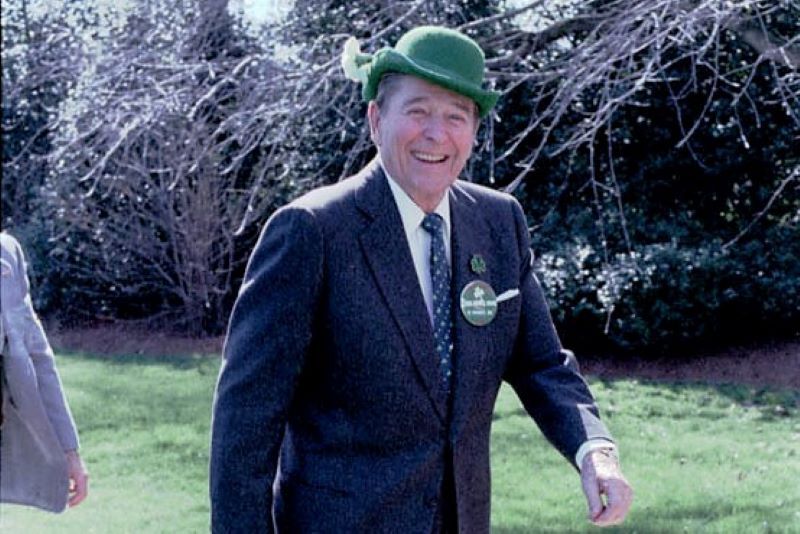 March 17, 1988: resident Reagan walking back to the oval office after a St. Patrick's day Dessert at the U.S. Capitol. (Courtesy Ronald Reagan Library)

That same year, the proud Irish American President took time out of his schedule to visit Pat Troy's Ireland’s Own, an Irish pub in Alexandria, Virginia, for a pint and a chat: