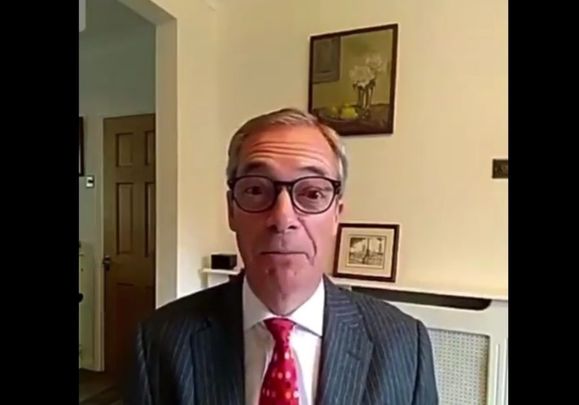 Nigel Farage has been tricked into posting a pro-IRA video online for the third time in just over a week, inadvertently paying tribute to martyred IRA soldier Seán South.

Farage recorded the Cameo video for everyone involved in the "Amadán" (Irish for idiot) fundraiser, who were "hiking overnight at Ama Mountain in New South Wales until dawn on Friday.

"A lorry load of volunteers set off on Thursday and the leader of the gallant band is Seán South," Farage said in the Cameo video. "This message comes from Garryowen.

And again… I can’t cope?? pic.twitter.com/GlNuRT6zhO

The famous rebel song pays tribute to Seán South, who died during the IRA Border Campaign of the late 1950s.

South died during an assault on an RUC barracks in Brookeborough, County Fermanagh on New Year's Day, 1957, and was immortalized in song when the famous song was written later in the same year.

Farage recorded the video through Cameo, where celebrities record personalized messages for a fee.

The former UKIP leader charges €86 for a personalized video message and €1,290 for business shoutouts.

Last week, another Cameo video of  Farage saying "Up the 'Ra," a slogan used in support of the Irish Republican Army (IRA), began to circulate online.

“This message is for Brian Kelleher, Brexiteer, and I hope you have a great birthday. This comes from your good friend, Aidan.

"Now, it’s a bit early in the day, so all I’ve got actually is coffee, but I hope you enjoy a few pints with the lads tonight. Up the ‘Ra!”

He also went viral earlier this week when he was duped into saying the republican saying "Tiocfaidh ár lá" (our day will come).

Farage was also tricked wishing former Sinn Féin President Gerry Adams a happy birthday in the same video, while he also referenced the IRA Brighton bombing in 1984, which killed five people at the Conservative Party conference at the Grand Brighton Hotel.

"Con and Mag got onto me because they wanted to wish you a happy 71st birthday!

"And they're looking forward to seeing you and some of the old team back at Tiocfaidh ár lá’s in Brighton.

"I’ve had the full story. You were the team leader there for many years."