Niall Horan helped round out Lewis Capaldi's visit to his hometown of Mullingar, Co Westmeath by introducing him to one of the Irish people's favorite delicacies! 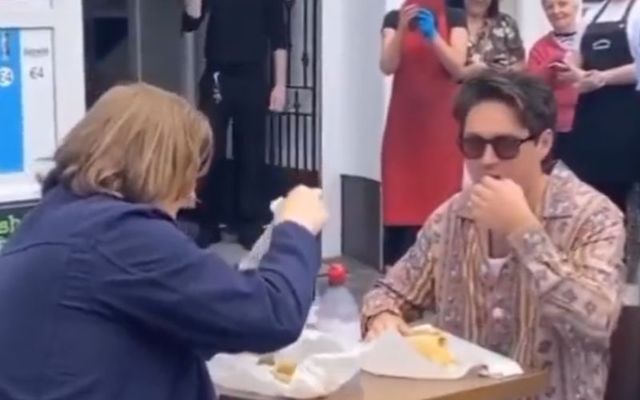 Niall Horan and Lewis Capaldi have been spotted having the absolute craic in Dublin and Westmeath in recent days.

Horan and Capaldi must have worked up an appetite with all their merrymaking as they were spotted outside of the Spar on Dominick Street in Mullingar, run by husband and wife team Roy and Angela Connor, chowing down on a new Irish favorite - chicken fillet rolls!

"It's decent isn't it?" a smiling Horan asks Capaldi as they dig into their meals, "It’s what I had every day for my lunch."

Surely the lads needed nourishment as they continued their charm offensive around Mullingar, Horan's hometown that was playing host to the 2022 Fleadh Cheoil na hÉireann last week.

So great to see the @fleadhcheoil off to an amazing start in Mullingar. ❤️

Among their stops was, of course, the huge #LoveMullingar mural of Horan in town:

2D Meets 3D
I was hoping for this the whole time that the image was being painted.
Finally an photo of Niall Horan with my mural. Pitty I was unable to be there but.. so happy they finally met
Special thanks to Mullingar@NiallOfficial@NiallHDailyNews @dailyniallbra @NHDNMedia pic.twitter.com/68puQZJ2k8

The two were only happy to stop and take pictures with fans, and were even filmed waving Irish flags in what appeared to be a barber shop:

It seems like Horan and Capaldi's romp around Mullingar is part of a bigger initiative from Guinness, though full details haven’t been revealed yet.

Horan and Capaldi have been close friends since 2018 when Horan asked Capaldi to join him on stage during a performance in Scotland. They were set to tour together in 2020, but the pandemic put that on hold, unfortunately.

We can’t wait to see what these two get up to next - especially if some Guinness is involved! It's no secret that both Horan and Capaldi are big fans of the black stuff.