“Who speaks properly?” Little girl with Northern Irish and American parents puts their accents to the test

This young Belfast toddler can switch seamlessly (and adorably!) between her parents' accents. 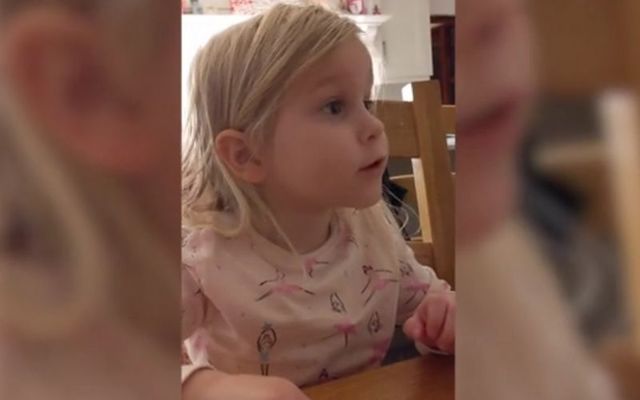 A young girl in Belfast hilariously imitated her Northern Irish mother and American father, showcasing the comical struggles of growing up listening to two highly contrasting accents in a viral video.

Kyra, who lives in Belfast with her American father and Northern Irish mother, can seamlessly switch between her parents' two accents depending on who she is talking to.

Her parents ask the toddler to repeat various words and phrases and Kyra automatically replied in the accent of whoever was talking to her.

"Kyra, say down," her father says at the beginning of the adorable video, prompting the toddler to mimic his American accent.

Her mother, talking in a thick Northern Irish accent, then asks her to repeat the word, prompting Kyra's accent to completely change.

Her parents, who didn't give their names during the one-minute video, ask Kyra to repeat various words and laugh as she switched accents depending on who asked the question.

Throughout the video, Kyra's parents ask her to repeat words like towel, cow, power, and mouse, resulting in hilarious responses in completely different accents.

The video ends with the most important question of all when her father asks her "who speaks properly"?

Unfortunately for him, young Kyra sides with her mother's Northern Irish inflection.

"Mummy," Kyra says, prompting both of her parents to laugh once more.

Her father launches one last desperate attempt to win over his daughter but is ultimately unsuccessful.

Who do you think "speaks properly"? Let us know in the comments!