From sports to entertainment and even food, Irish leprechauns are well-known across American pop culture! 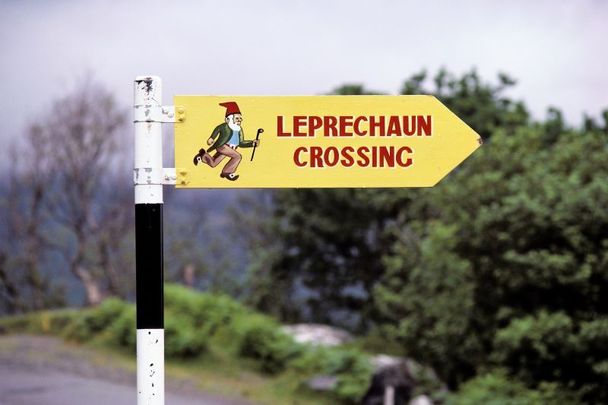 Watch out for leprechauns! Getty Images

Known for protecting pots of gold, gliding down rainbows, and creating some mischief in general, leprechauns have been embraced across pop culture.

Donning a red beard complemented by a green suit and black buckled shoes, the omnipresent, round-faced little people are featured on shirts, cereal boxes, in films, books, and movies.

The fascinating figures from Irish mythology continue to linger today and have made their way into American sports, entertainment, and even food! Here are some of pop culture's most beloved Leprechaun figures...

1. The Leprechaun from the "Leprechaun" movies

Portrayed by Warrick Davis, this evil and menacing leprechaun teaches those a deadly lesson who dare take his pot of gold. He wreaks havoc on all of those who have crossed him, including Jenifer Aniston, who appeared in the original Leprechaun film pre-Friends. Due to his overwhelming popularity, the film is part of a six-film franchise that has given us the classics such as Leprechaun in the Hood and Leprechaun: Back to the Hood.

Lucky has been the mascot of the General Mills breakfast cereal Lucky Charms since its inception in 1964. The greedy Leprechaun is very protective of his marshmallowy pink hearts, purple moons, orange stars, green clovers, blue diamonds, and purple horseshoes, and is loathe to share with starving children. They are so coveted for being “magically delicious,” according to the brand’s jingle.

Also known as “Lucky the Leprechaun”, but not to be confused with his cousin of sugary cereal fame, the Boston Celtics leprechaun acted as a good luck charm for a team that has won plenty of NBA championships. This insignia was actually designed by the legendary coach Red Aurbach’s brother, Zang, in the 1950s. This mascot is known for its golden matching hat, bowtie, and vest festooned with green shamrocks and incredible leaping ability.

This Leprechaun in a fighting stance with its dukes up is a proper mascot for a team named the Fighting Irish. Appointed as the official mascot in 1965, a human leprechaun leads the team’s marching bands at football games and the student cheering sections as a member of the cheer squad. It is no easy chore to be a leprechaun at Notre Dame as grueling tryouts involve mastering the Notre Dame “jig," as well as completing 50 pushups and handstands.

Back in 2006, the neighborhood of Crichton in Mobile, Alabama went viral as they tried to hunt down this evasive leprechaun who only comes out at night. So fast and gifted at shapeshifting is he that no recorded evidence exists of this sneaky Irishman!

6. The Leprechaun King in "Darby O’Gill and the Little People"

Brian Connors, played by the Irish actor Jimmy O’Dea, is the Leprechaun king of “the little people” in this Technicolor Disney family classic. The film details the encounters between the retired laborer Darby and the feisty Brian Connors. The most famous and endearing scene is of Darby playing “The Fox Chase” on the king’s Stradivarius violin to trick the leprechauns into dancing and riding horses while letting himself free from their clutches in his quest to capture the king and regain his three wishes.

This buckled shoe-wearing fairy is featured in the film adaptation of the musical directed by Francis Ford Coppola and starring Fred Astaire and Petula Clark. The leprechaun Og (Tommy Steele) attempts to retrieve a pot of gold taken from him by the film’s namesake or risk becoming human if failing to do so. After falling in love with a woman, he realizes maybe being a leprechaun isn’t all that it’s cracked up to be. He certainly will not miss those uncomfortable shoes and stressing every day about a pot of gold.

This modern-day interpretation of the mythical figure by Colm Meaney is a made-for-TV Hallmark film. Seamus the leprechaun opens up the magical world of the wee ones to an American businessman who probably wants them to sell cereal. This instant classic features a gripping Romeo and Juliet-esque feud between the fairies and the leprechauns. Watch those shillelaghs fly and check that poteen for poison.

A Disney Channel original movie, "The Luck of the Irish" debuted in 2001 and tells the story of Kyle, who is "a kid one day, a leprechaun the next." Warning: some particularly bad attempts at Irish accents are on display here!