WATCH: Irish priest says “suck that up” before playing Liverpool anthem at Mass

Father Martin Tobin, an Irish priest based in Co Kilkenny, is going viral for playing the Liverpool anthem 'You'll Never Walk Alone' at the close of his Mass on June 27. 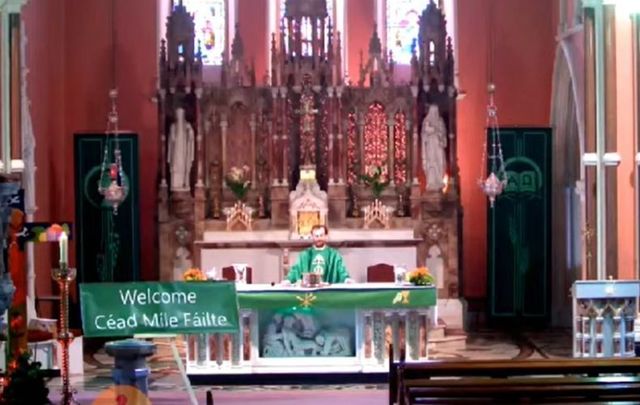 Fr Tobin from Co Kilkenny is going viral after playing the Liverpool anthem "You'll Never Walk Alone" at the close of his Mass. Stephen McNally, YouTube

Father Martin Tobin, an Irish priest based at the Church of the Assumption in Co Kilkenny, is going viral after playing the Liverpool anthem “You’ll Never Walk Alone” at the close of his Mass on June 27.

During his mass on June 27, which was live-streamed due to coronavirus restrictions, Father Tobin seamlessly segued politics into sport, into religion - truly, a talented orator!

In his closing comments, referencing his green stole, Fr Tobin said: “The green, in case any of the smart alecs - not that we have any smart alecs in the parish - has nothing to do with the formation of a government today, I support none of them whatsoever.

“But I do support my final hymn. We have been through a hard time, and a difficult time. But remember, we haven’t been walking alone.

“There’s been a guidance with us, and a guide that has safely brought us this far, and my prayer, and my blessing for you tonight is we go into this new phase, new beginning, god blessing us, the father, the son, and the holy spirit, amen."

Father Tobin concludes: “For the Liverpool fans - sorry Manchester United, and Gunners, and all of you who support all the others, swallow your pride and suck this up, for this is for Liverpool," before hitting play on 'You'll Never Walk Alone' by Gerry and The Pacemakers, the adopted anthem of the Liverpool football club.

Read More: Irish priest has mass-goers in hysterics as he shows off his Christmas present