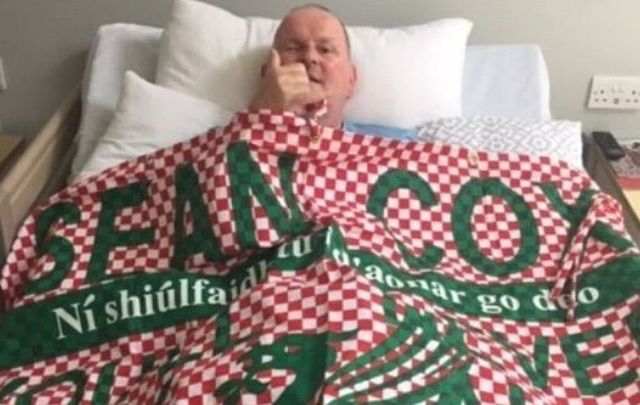 The CEO of Liverpool FC poignantly dedicated the club's recent Premier League title win to Irish fan Sean Cox, a father-of-three who suffered brain damage after he was attacked by opposition fans at the club's stadium two years ago.

Liverpool clinched their first English league title in 30 years on Thursday night and club CEO Peter Moore dedicated the victory to Cox just moments after they had been coronated.

The Liverpool CEO said on Twitter: "One man in Ireland is loving every moment of this...thinking of you this evening Sean. You'll Never, Ever, Walk Alone."

One man in Ireland is loving every moment of this...thinking of you this evening Sean. You'll Never, Ever, Walk Alone pic.twitter.com/J1jCb3hTXj

Moments earlier, Moore mentioned Cox in a separate tweet. He said that the club's famous title win was dedicated to the Irish fan who was "smiling in Ireland."

Moore additionally dedicated the win to his own late father, victims of COVID-19, and to the 96 Liverpool fans who perished in a stadium crush in Sheffield in 1989.

Number 19 is finally here. It’s for our millions of fans, near and far...we miss you. It’s for the Reds that fell to the virus. It’s for my dad, who first took me to Anfield in 1959. It’s for Sean Cox, smiling in Ireland right now. And it’s for the 96, who will never be forgotten

For Sean Cox, it is another chapter in an emotional two-year journey since he was brutally attacked by Italian fans outside Anfield in April 2018 as Liverpool prepared to take on Roma in the Champions League semi-finals.

The attack left Cox in an induced coma and he has been treated in rehabilitation centers in Ireland and the UK for his injuries. The assault left the father-of-three with permanent brain damage and confined him to a wheelchair and he only returned to his family home in May 2020, more than two years after the attack.

Liverpool Football Club has supported the Cox family throughout his recovery and Cox was in attendance in November as Liverpool beat Manchester City 3-1, a crucial moment in Liverpool's season. Several Liverpool players and Jurgen Klopp, the club's manager, posed for photos with Cox after the game.

The club additionally held a fundraiser in the Aviva Stadium in Dublin when a team of Liverpool legends took on a team of legends from the Republic of Ireland.

The Cox family issued a statement congratulating Liverpool on their title win.

"Sean couldn't be happier for Liverpool being crowned champions and sends his love and congratulations to Jurgen Klopp and the entire club.

"The Cox family are so delighted that Sean got the opportunity to go to Anfield on a couple of occasions earlier this season and meet many of his LFC sporting heroes. Liverpool FC is a huge part of Sean's life and he hopes to be back in Anfield before long."