Irish-flag-colored parrot is a better Irish dancer than you

Stick on a few jigs and reels and this parrot will be the life and soul of the party! 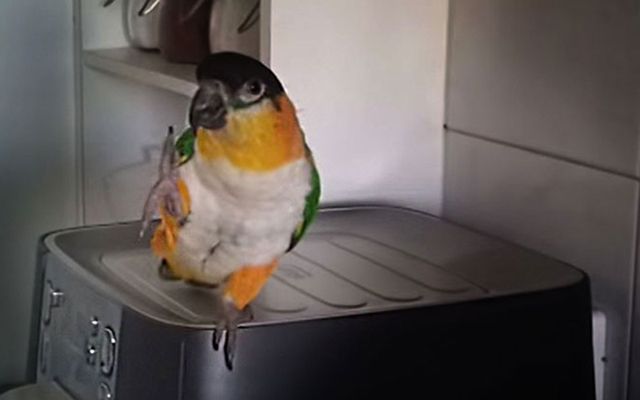 After the incredible sight last week of this herd of cows showing their love for Irish musician Sharon Shannon, we didn’t think we could see animals reacting to Irish traditional music in any better way but count us proved wrong.

The owners of this remarkably Irish-flag-colored parrot noticed early on that he had a passion for dancing and were sure to encourage his talents by playing music for him to jive along to whenever possible. On this particular occasion, they decided to stick on a few jigs and reels to get the pretty Polly’s feet tapping in tribute to the tricolor stretched across his feathers. The result is perfect as he leaps with an agility that Michael Flatley would be proud of and certainly nails some steps in time to the music better than we could do ourselves.

This isn’t the first parrot of all time to show a touch of Irishness either. A few months ago we met Poncho, the Hail Mary parrot, who recited the Hail Mary morning, noon, and night.

The parrot is also not the first pet to show off some Irish dancing skills. The amazing Australian shepherd dog Secret has been trained by his Irish-dancing owner since he was a pup and has picked up some pretty remarkable routines.

Standing cross your paws😊💗 We don't usually do it side by side, but I'm glad we tried it this way because it seems to be easier for her to understand it next to me😀 ~~~~~~~~~~~~~~~~~~~~~~~~~ Follow my Pawtners! @borderaussiebodey @lilly.the.aussie @sassyandsila @mksdoggyoverload @bluebearaussie

What do you make of this Irish dancing parrot? Do you have a pet you think could rival it? Be sure to let us know in the comments section, below.