The famed Irish accordion player is quickly mobbed by a herd of cows eager to her her music. 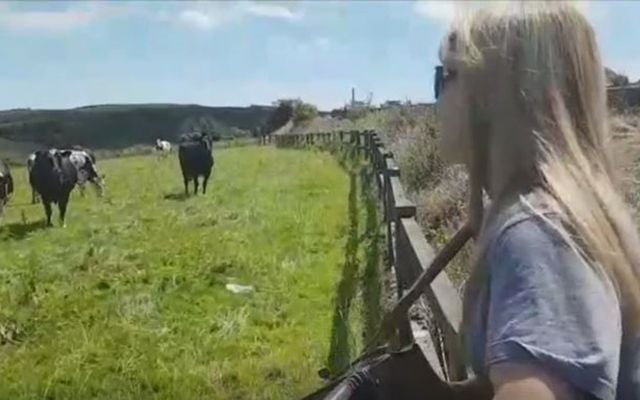 The much-loved Irish musician Sharon Shannon is well accustomed to playing before tons of adoring fans but her following this week crossed species as she wowed a group of cows in an Irish field.

The County Clare accordion player milked her road stop for all it was worth as she was traveling to Youghal, County Cork, pulling out “the box” to see whether a nearby herd would be as appreciative of her talents as her normal crowds.

The result was incredible as the interested bovines immediately began to move in the 49 year old’s direction and almost seemed to trot forward in time to the music, gradually edging closer and closer to the source and jostling each other out of the way to get a better look.

Shannon, known for her sunny disposition, was shocked herself at just how responsive the cows were to the music as they certainly appearing to share her own love of Irish traditional music.

Best known in the US for collaborating with Mundy on his hit song “Galway Girl”, Shannon is one of Ireland’s most famous traditional musicians, playing the tin whistle, the fiddle, and melodeon but being most prized for her button accordion skills. Her self-titled album became the best-selling Irish traditional music album in the country ever (a title it still holds) in 1991 and she continues to tour and make new music, her 10th studio album being released just this year.

The video of Shannon perched upon a wooden fence while she belts out a tune quickly went viral and has been viewed over 400,000 time since it was posted on Tuesday.

Have you ever seen animals respond to music like this before? Let us know in the comments section.