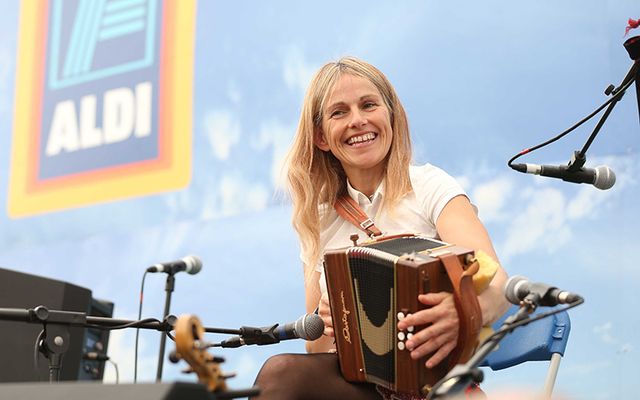 The famous traditional Irish musician has been in a relationship with his brother Jimmy Healy for seven years RollingNews.ie

Renowned Irish traditional musician Sharon Shannon has revealed that the man who helped her find love again following the death of her long-term partner Leo Healy was none other than his brother Jimmy. The musician has often spoken of her seven-year relationship with Jimmy Healy which guided her through her previous heartbreak, but this is the first time Shannon has revealed the family connection.

Shannon’s story has spiked interest recently because of a similar revelation earlier this month by Joe Biden’s son Hunter who is now in a relationship with his brother beau’s widow Hallie.

Although the Co. Clare music star admits that some people may find the relationship “weird”, she has described it as something that seemed “natural.”

“For ages, we were the best of friends and then we got together,” Shannon told Irish magazine the RTE Guide. “Now some people think that is weird, but it seemed just natural to us.”

“I didn’t really know Jimmy that well back then but we became friends after Leo died,” she continued.

“Jimmy was heartbroken as well and he helped me through a really tough time.”

Best known in the US as the button accordion player who accompanies singer Mundy on his Irish anthem “Galway Girl”, Shannon, 48, is one of the best known Irish traditional musicians in the world having played in the White House for Bill Clinton in 1991, recorded with Bono from U2, and toured with Willie Nelson.

She suffered heartbreak in 2008 when her partner Leo, aged 46, suffered a heart attack and died in his sleep while she was on tour. Shannon believes the Crohn’s disease medication Leo had used long-term had weakened his heart.

The musician began speaking of her new partner about two years after Leo’s death, always paying tribute to Jimmy but never mentioning that he was Leo’s brother. She has now revealed that, although she did not know Jimmy very well as Leo’s brother, they found each other after his death.

“He’s an absolutely fantastic partner,” Shannon previously told The Independent when the family connection was not known.

“He’s also my best friend. He has a brilliant sense of humor and he makes me laugh every day.

“He is extremely patient with me and my scatty ways and he’s always 100 percent reliable. He adores his family and is very devoted to them and is very protective of them.”

With Leo having a family of twelve, Shannon had not known all of his siblings well but became close with Jimmy in their shared grief over Leo’s death.

“That’s not the kind you get over, we had a wonderful time together and I still miss him a lot,” she told The Irish Times of Leo back in 2012.

“I still miss Leo and I see him sometimes in my dreams. I have lots of lovely pictures of him up around my house,” Shannon also told the RTÉ Guide.

“He made loads of furniture as he was great with his hands and very artistic.

“For example, I’d draw a fiddle and he’d make a piece from it and I have those pieces still, all ‘round my home.

“He wasn’t a huge fan of Irish music, but he was a big fan of Phil Lynott and rock ‘n’ roll.

“In a way, he educated me in that music as well.”