There were plenty of reports of a fireball - or a meteor? or a comet? or space junk? - seen flying over Ireland on September 14. 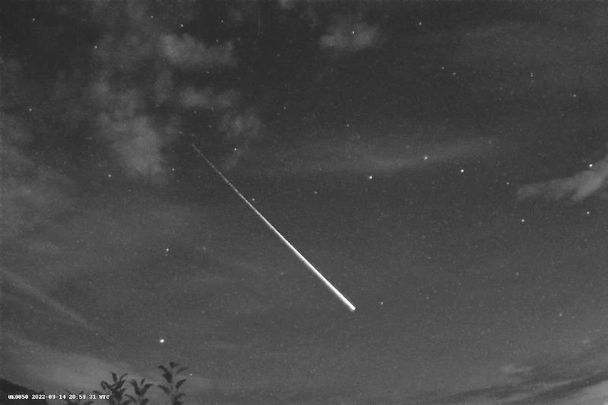 The "fireball" spotted over Ireland and the United Kingdom on September 14, 2022. UK Meteor Network

There have been 1,015 reports about a "fireball" seen over Ireland and the UK last night, Wednesday, September 14, according to the International Meteor Organization (IMO).

The fireball was also spotted over Northern Ireland, Scotland, and England.

"It was so cool!," one person named Claire in Northern Ireland said in her report to the IMO.

"It was going through clouds and the light was reflecting off the clouds as it went through lighting the clouds up a bright blue," John, also from Northern Ireland, said.

Roisin in Dublin said she "was absolutely shocked and excited" to see the fireball, while Dan in Wicklow said, "The meteorite started of yellow and turned green as it burnt out."

The American Meteor Society, a partner of IMO, said on Thursday: "The initial computer generated trajectory of the AMS #2022-6109 event shows that this fireball entered the atmosphere North of Lock Ryan and its flight ended North of the Islay Island."

On Thursday afternoon, the UK Meteor Network, which earlier said it was of the opinion that the fireball was "space junk," said the object spotted on Wednesday night was "definitely a meteor."

OK. The final analysis is in! The fireball over NI and Scotland last night was definitely a meteor. The fireball observed yesterday (Sept 14, 20:59:40 UT) above the UK lasted over 20 seconds and traveled NW, passing directly over Belfast. 1/4 pic.twitter.com/GnV70S13B8

Earlier, David Moore of Astronomy Ireland, told The Journal: “It’s one of the biggest fireballs I can remember in a year or two at least.

“It’s very unusual, because if you look at the weather forecast maps, it was mostly cloudy over most of Ireland and Britain, and we’ve seen reports coming in from London, all the way across to Killarney, all the way up to County Donegal and loads in Scotland, and even the north coast of Scotland.

“So that’s redefining these islands completely. Anyone that had a clear sky on the whole of both islands would have seen it, and it’s almost exactly at 10 pm. It was about 30 seconds before 10 pm.”

Some starry-eyed spectators took to social media to share snaps of the event.

This video was taken in Dublin:

These videos were captured in West Belfast:

This video was also filmed in West Belfast:

@barrabest Hi Barra, spotted this just now. At first I thought it was a firework, no noise and it didn't explode 😄 quickly got my phone out, are we due any meteor showers or anything? pic.twitter.com/sQbcVRpDLt

These shots were captured in Donegal:

Fireball spotted crossing #Donegal this evening. Described as green and lighting up the sky. Some described hearing a load bang a short time later. pic.twitter.com/0WavzL7cuK

One person from Moville, Co Donegal told Donegal Daily that the fireball was followed by a "huge bang". Another reported that it appeared to "fall to earth" before exploding.