Lil Cox and Doris Hobday, 95, also known as the Tipton Twins, appeared on Good Morning Britain with Piers Morgan and Susanna Reid to talk about the COVID-19 pandemic. 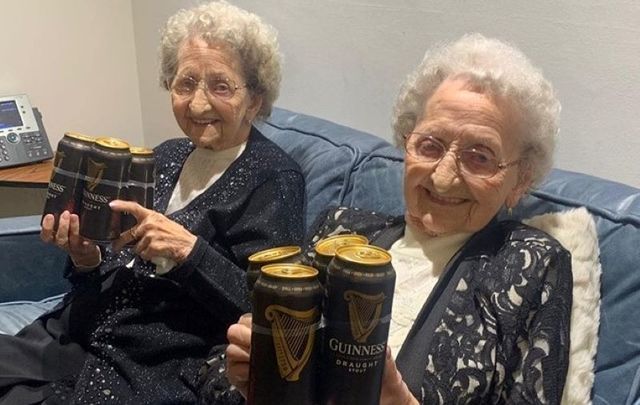 The Tipton Twins claim that drinking Guinness is one of the secrets to a long life. Lil and Doris Facebook

Britain's oldest-living twins have been sharing their tips on surviving during the COVID-19 pandemic while doubling down on their claim that Guinness is the secret to a long life.

Lil Cox and Doris Hobday, 95, also known as the Tipton Twins, appeared on ITV's Good Morning Britain with Piers Morgan and Susanna Reid on Tuesday to talk about the COVID-19 pandemic and their experiences during it.

The two twins are huge fans of the show and were in fine form during their debut appearance, constantly flirting with Piers Morgan.

Lil had the hosts in stitches when she suggested that "plenty of sex and no Guinness was the secret to Doris's long life.

"No sex and plenty of Guinness," she told Piers Morgan who was howling with laughter.

Morgan asked Lil about her crush on Hollywood actor Jason Statham, who was born in the English Midlands, relatively close to where the twins grew up.

"Lil, I hear I have a love rival. Jason Statham; you're rather fond of him," Morgan said.

"One night with him and I'd die happy," Lil replied, drawing shrieks of laughter from the two hosts.

Lil and Doris had been living in a care home prior to the coronavirus pandemic but Lil's daughter Vivian took them both out of the home and moved them in with her due to fears around COVID-19 in care homes and in the elderly community.

The twins said that living with Vivian was like living in a five-star hotel.

The pair were separated for the first four weeks of COVID-19 lockdown and Lil joked that it was "good" to get away from her sister.

The elderly twins also had a message for the people of Britain during the COVID-19 pandemic.

"Just make the best out of everything and show plenty of love," they said.