The Gardiner Brothers have teamed up with McDonald's as it rolls out its famous Shamrock Shakes in Ireland ahead of St. Patrick's Day 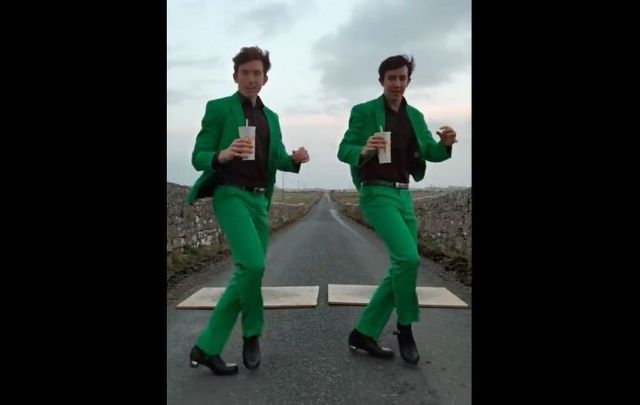 The Gardiner Brothers, Irish American Irish dancing phenoms, have teamed up with McDonald’s ahead of St. Patrick's Day.

Shamrock Shakes, as you likely already know, are the minty green milkshakes that McDonald's releases for a short time each year in honor of St. Patrick's Day. They were invented in Connecticut in the late 1960s and have been a hit every March since the 1970s.

The new Irish dance video from the Gardiner brothers is backed by “I’m Shipping Up to Boston” by Irish American rock group Dropkick Murphys and opens with a shot of the lads' hard shoes landing beside two Shamrock Shakes.

With scenic Co Galway in the background, Matt and Mike begin to Irish dance - as always, in simply amazing form - before almost magically switching into dashing green matching suits.

In their Instagram post, which has since amassed more than 18k likes in less than a day, the brothers wrote: "The Shamrock Shake is back at McDonald's Ireland! We know it'll keep our feet moving as fast as possible in the lead up to St. Patrick's Day ☘️ Get yours now at your local McDonald's and show us your fastest, tastiest moves 🔥"

Check out the festive video from the Gardiner brothers for McDonald’s here:

Matt and Mike Gardiner were born in Denver, Colorado to Irish parents and moved as a family back to Ireland in 2006. In Galway, the talented brothers trained with the Hession School of Irish Dance and went on to both won multiple World Irish Dancing Championship titles.

While they have both retired from competitive Irish dancing, the Gardiner brothers have toured with the likes of Riverdance, The Kilfenora Ceili Band, and Fusion Fighters.