Irish wildlife photographer Daniel Lettice was in the right place at the right time when some dolphins came to play with kayakers off the coast of Cork. 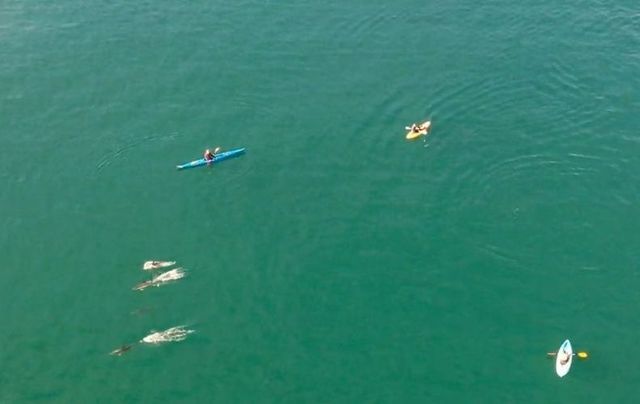 Irish man Daniel Lettice captured stunning footage of some rather playful dolphins while filming off the coast of Co Cork on May 1.

Lettice, a wildlife photographer and whale watcher from West Cork, shared the drone footage that he filmed off of Long Strand on his Twitter account, @IntoTheWild45 on Saturday.

The Irish man told IrishCentral how the wonderful footage came to be: “Last Saturday morning (01 May) was a perfect morning for whale watching from shore - flat, calm.

“I went to check out my usual viewing spot at Cloghna Head, overlooking the Rosscarbery and Long Strand areas.

“I hadn't even parked the car when I saw the whole bay, from Galley Head to High Island, was alive with common dolphins, 150 to 200 animals. Lucky enough some were within a few hundred metres of shore.

“The three kayakers came paddling through, I launched the drone and took the footage.

“I've seen tons of whales and dolphins in West Cork over the last 15 years whale watching but it never gets old. It blows my mind every time I see them.”

Not long before he encountered the playful dolphins, Lettice shared some more mind-blowing footage of basking sharks coming in close contact with kayaker Paul Cleary off Red Strand, also along the coast of West Cork: