Irish American comedian Des Bishop's 2014 clip of him singing "Come Out Ye Black and Tans" on a Chinese dating show is going viral again after he reposted it on TikTok this week. 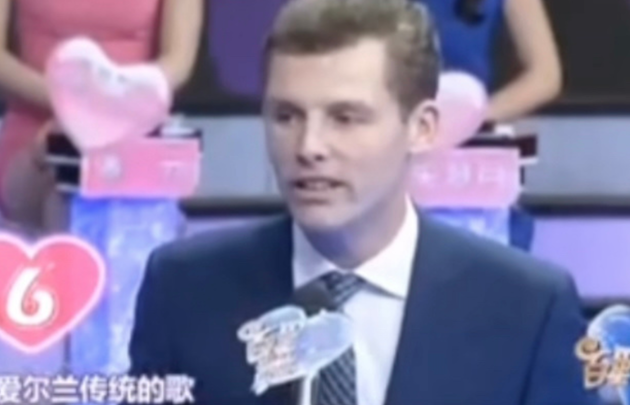 Des Bishop's TikTok of him singing "Come Out Ye Black and Tans" on a Chinese dating show in 2014 is going viral.

Bishop, who was born in New York and moved to Ireland when he was 14, gave a rousing rendition of the Irish classic “Come Out Ye Black and Tans” on a Chinese dating show back in 2014.

He's reshared the video this week as a promo for his upcoming gig at Edinburgh Fringe Festival. So far, the TikTok clip has racked up more than 60k likes.

Bishop’s Mandarin seemed pretty impressive as he charmed the girls on the Chinese show, “One out of 100” or “Cream of The Crop,” but it was his heartfelt rendition of the Irish classic “Come Out Ye Black and Tans” (a rebel song referring to the Black and Tans, the British paramilitary police auxiliary force in Ireland during the 1920s) that really got the crowds going.

@desbishop5 Scotland come see my show Mia Mamma at the Edinburgh Fringe 2022. This isn’t in it but I know some of you love this. #comedy #glasgow #scotland #funny #celtic #standup #edinburgh ♬ original sound - Des Bishop

Bishop lived in China for a year to learn to speak Mandarin. His six-part documentary on the cultural experiment and experience, “Breaking China,” aired on Ireland’s national broadcaster, RTÉ, back in 2014.

"Breaking China" was Bishop’s second language-based cultural experiment. He previously lived in the Gaeltacht in Connemara and learned Irish for his show “In the Name of the Fada” (fada being the Irish word for the accent placed on a vowel – such as á).

"Come Out, Ye Black and Tans" is an Irish rebel song referring to the Black and Tans, or "special reserve constables" (mainly former World War I army soldiers), recruited in Great Britain and sent to Ireland from 1920, to reinforce the Royal Irish Constabulary (RIC) during the Irish War of Independence.

The song was written by Dominic Behan as a tribute to his Irish Republican Army (IRA) father Stephen, who had fought in the War of Independence and is concerned with political divisions in working-class Dublin of the 1920s. The song uses the term "Black and Tans" in the pejorative sense against people living in Dublin, both Catholic and Protestant, who were pro-British. The most notable recording was in 1972 by the Irish traditional music group, The Wolfe Tones, which re-charted in 2020.