Dazzle caused chaos during the Women's All-Ireland Cricket T20 Cup semi-final, but his performance has earned him the title of player of the month by the International Cricket Council. 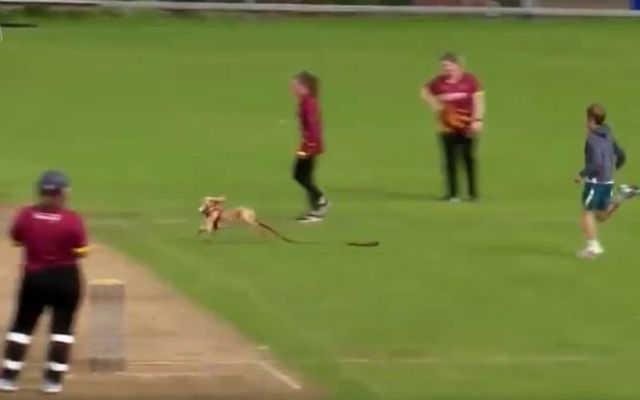 An enthusiastic spectator interrupted the Women's All-Ireland Cricket semi-final over the weekend, but his performance has earned him the title of player of the month.

During the Women's All-Ireland T20 Cup semi-final match between Bready and CSNI on Saturday, 11 September, a furry companion ran onto the pitch and caused a moment of chaos when he stole the cricket ball.

The spectacle was caught on camera and has been viewed 4.5 million times with sports commentator Heatley Tector narrating the moment in between laughter.

"The dog has the ball!" can be heard from Tector in the video before he begins laughing as the dog ran around the playing field with the ball in his mouth, and his lead trailing along the ground after him.

Players ran after the pup who looked like he was enjoying the chase and he eventually decided to hand over the ball before his young owner ran forward to fetch him.

"I think we've retrieved the ball. It may need a clean. I think this has brought Covid regulations to a whole new standard," joked Tector.

It was revealed that the dog's name is Dazzle and showing their appreciation for the moment of laughter he gave, the International Cricket Council has named him their honorary player of the month!

We have an additional Player of the Month winner this time 🐶#POTM | @cricketireland | @IrishWomensCric pic.twitter.com/UJjAadIxdA