Cullen O'Reilly burst into tears when his uncle Kenny Conway surprised him with tickets to the All-Ireland Senior Football Championship final between Mayo and Tyrone. 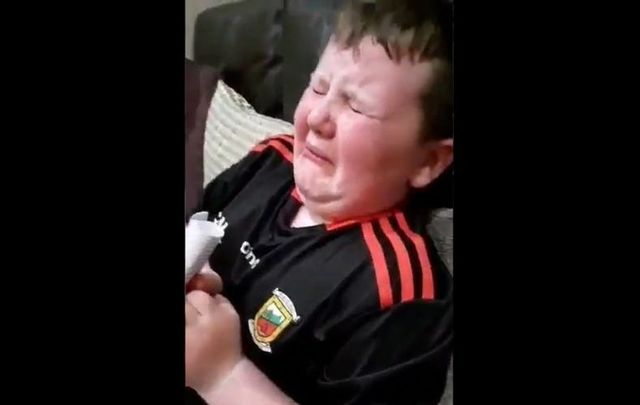 Cullen O'Reilly got the shock of his life when he was gifted surprise tickets to the GAA All-Ireland final between Mayo and Tyrone. @RefComeOn, Twitter

Cullen O’Reilly, 8, has gone viral with his heartwarming reaction to being gifted surprise tickets to the GAA All-Ireland Senior Football Championship match between Mayo and Tyrone.

A video of O’Reilly’s surprise, only 24 seconds long, was shared on Twitter by Ah, Ref! on September 8, just days before Mayo will take on Tyrone in the GAA All-Ireland Senior Football Championship in Dublin's Croke Park.

The video shows O’Reilly, donning a Mayo jersey, of course, tear into a paper bag not knowing what surprise awaits him.

When he opens up the piece of folded paper inside, he is blown away.

Hat tip to Kenny Conway for making it all happen and vid. pic.twitter.com/QZwpx2aRFn

Anyone familiar with GAA will know well that securing a ticket to the All-Ireland Senior Football Championship is a game in of itself that requires networking and a dash of luck.

This year, however, the rush to get tickets is all the more difficult as Croke Park will be at limited capacity in line with public health restrictions.

O’Reilly was able to get his hands on a ticket thanks to his uncle Kenny Conway and the two spoke with Ian Dempsey on TodayFM on Friday, the day before the big match.

“I am very excited,” O’Reilly said.

As it happens, Conway was paying forward a similar surprise he received as a child when Mayo took on Kerry in the 2004 All-Ireland final and Conway was surprised with a ticket the night before the match.

Perhaps making O'Reilly's surprise all the more sweet is that the young GAA fan could be there in person to see Mayo end their "curse" of having not won the All-Ireland final since 1951.

“I think they’ll win, they won’t win by much," Conway said on Friday.

“Up Mayo,” O’Reilly chimed in.

Mayo will take on Tyrone tomorrow, Saturday, September 11 at Croke Park in Dublin. Throw-in is scheduled for 5 pm local time.