Belle, the Golden Labrador dog cashier at a shop in Co Meath, gets our vote to be the next employee of the month! 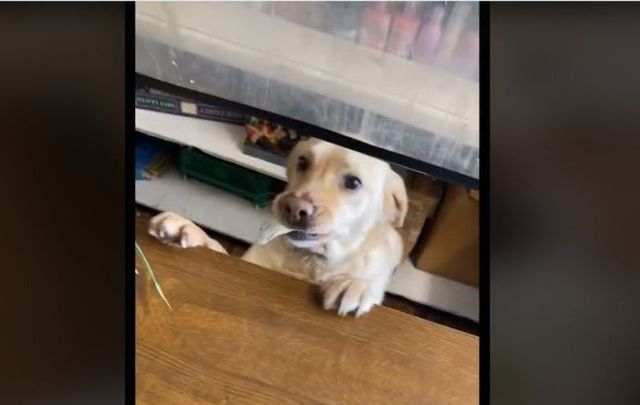 Belle the Golden Labrador hard at work in her shop in Co Meath. morganreid21, TikTok

A shop in Co Meath has one unusual but popular employee on its roster - Belle, the Golden Labrador.

Belle came to prominence back in March when a local lad, Morgan Reid, filmed his trip to the shop only to be impressed with Belle's excellent customer service skills.

In his first TikTok video, which has been liked more than 34k times, Morgan Reid says: "Alright lads, so there's this crazy shop right beside where I live, and I only heard about it recently so I had to go check it out.

"It's literally just someone's gaff with a shop inside," Reid says as he pulls up outside the unassuming shop. "Mad looking place."

Not long after venturing inside, Reid and his pal are greeted by an enthusiastic shop attendant - Belle, the Golden Labrador.

"Now wait till you see this dog," Reid says, "this is where it gets mad."

Reid hands over his money to Belle who takes it in her mouth and scurries toward the register.

"The dog takes the money off you, the dog runs the shop, I couldn't believe it," Reid says.

Of course, Belle was rewarded for her job well done with copious head scratches from an understandably impressed Reid.

Intrigued, Reid returned to the "dog shop" the following day.

"What a shop," Reid says, "support your locals."

While Belle is no doubt impressive, she isn't the first K9 cashier at the shop. Ailis, who owns the shop, told the Irish Independent that she first hired a German Shepherd to work the till some 30 years ago.

"They all taught themselves to take the money," Ailis said. "The customers gave them the money and I'd sell the dogs biscuits in return, and that's what kept them happy."

Now, Belle has taken over and has not surprisingly won the hearts of the local customers.

"People come in to visit the dog and ask when she's on duty," Ailis said.

She added that Belle is "very happy with her working conditions. She gets her food and her walks on the beach, as well as her visits to the vet."