Veteran Irish actor Colm Meaney hilariously mocked English attitudes towards Ireland in this new commercial for Paddy Power, the Irish betting company. The company is known for making mischievous viral content and this time is no different. 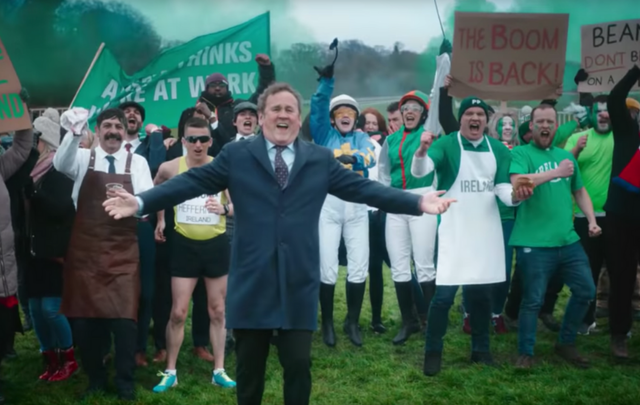 Colm Meaney was joined by a small band of Irish people to deliver his message to the English in the new Paddy Power ad. Paddy Power YouTube

In a commercial for the Cheltenham Racing Festival - the biggest racing festival in the UK and Ireland - Meaney gets a few things off his chest about England.

The veteran actor says that Ireland is going to take revenge on England for a number of comically petty offenses by winning more races in this year's festival.

Meaney references the way English people mock the Irish for how they say "thirty-three" and says they have no right considering English people can't even pronounce "Siobhan."

"For ordering a 'black and tan' in front of us without blinking or for saying your grandfather was from Clare," Meaney says before becoming comically stony-faced and saying "he was a landlord."

The pettiness escalates and Meaney says he wants revenge for English people adding baked beans into a fry and for geoblocking the BBC iPlayer.

He makes his monologue while walking down the hallowed race track and he is followed by a cluster of Irish people holding signs like "beans don't belong on a fry."

Read more: Irish words and slang to learn before you visit Ireland

There are also a number of signs with Irish phrases, including "the boom is back" and "light a candle for Ireland."

The latter phrase is a nod to Irish people at exam time who say they will light a candle for students taking exams, while the former is a tongue in cheek expression used by Irish people to signal the return of economic prosperity.

Meaney continues along the course and ridicules the way the English media claims Irish celebrities as their own and alludes to Saoirse Ronan, Niall Horan, and Katie Taylor - all of whom have been incorrectly reported as British in the past.

The actor doesn't stop there, however, and his complaints become even more trivial if that were possible.

He blames the English for leaving the Irish in the worst part of their airports and for chasing out Harry and Meghan from the Royal Family - "the only royals who were any fun."

Perhaps Meaney's biggest gripe is that English people don't care as much as they should about Ireland versus England in sporting competition.

"Every year, we get one chance. Our horses winning big on your turf," Meaney says to conclude his hilarious rant.

What do you think of his message? It made us laugh. Let us know your reaction in the comments section below.