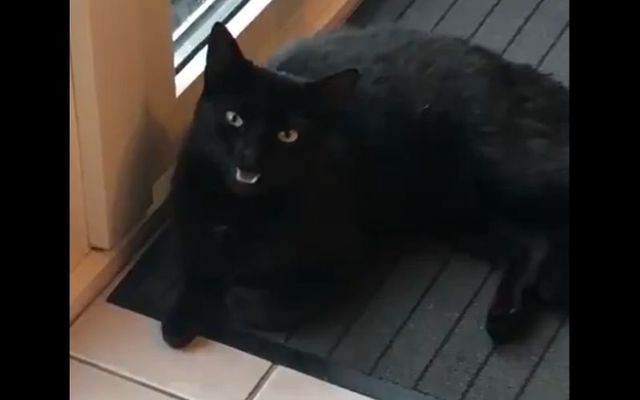 Does this cat have a Northern Ireland accent? Aye. Michael Allen @michaelallen75, Twitter

Two cats have gone viral on social media for having distinctly Irish-sounding accents.

A cat with the "strongest Cork accent you'll ever see" is seen talking like a true Cork native as it looks back over its owner's shoulder in one video recently posted on Reddit.

Wearing a yellow dickie bow, the cat "could get a job presenting the Rose of Tralee", said one Reddit commenter.

"Sounds like the cat is giving an interview after having won gold in an international rowing competition," said another, referring to Paul and Gary O'Donovan, who went viral during the 2016 Olympic Games in Rio de Janeiro.

In another viral video posted on Twitter in September 2020, Leo the cat is seen communicating with its owner in what appears to be a thick Northern Irish accent.

Posted by Michael Allen, the clip features the cat's owner asking the animal if he is a "good boy", to which the cat appears to respond "aye" in a thick Derry accent.

"I swear my brother's cat has a Northern Ireland accent. Aye," Allen said in the original post.

I swear my brother's cat has a Northern Ireland accent. Aye. pic.twitter.com/KRFanIwAuk

The clip has been viewed almost 250,000 times since it was posted two years ago, receiving more than 14,000 likes.

"This is the greatest thing ever," one Twitter user responded.

Which cat do you think has the strongest Irish accent? Let us know in the comments!

The world’s Viagra is made in a small Irish village (Botox, too!)