Biden’s bagpipe gaffe - it's uilleann pipes that are Irish! 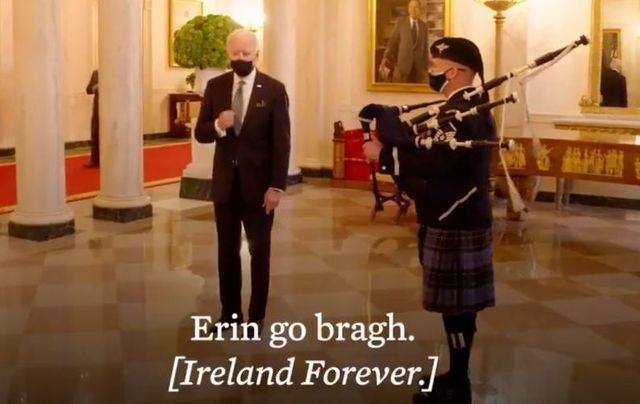 March 17, 2021: President Joe Biden was treated to a bagpipe performance of 'The Minstrel Boy' at the White House on St. Patrick's Day. POTUS Twitter

President Joe Biden sparked a social media debate last week when he claimed that a performance by a bagpiper at the White House made "an Irishman feel special".

Biden posted a video of a special St. Patrick Day performance of "The Minstrel Boy" in the White House on Twitter on Sunday, sparking a debate about whether bagpipes could be considered an Irish instrument.

CNN reporter Donie O'Sullivan, a native of Co Kerry, responded to the short video by saying that "bagpipes are Scottish", causing even further debate in the comments section.

Many Twitter users agreed with O'Sullivan and said that bagpipes are Scottish by definition, while others claimed that bagpipes originated in Ancient Egypt or the Middle East and say that they were brought to Scotland by Roman legions.

This is Scottish. Bagpipes and kilts 🏴󠁧󠁢󠁳󠁣󠁴󠁿 not Irish. I’m equally scared that neither the Whitehouse staff nor all the people replying to this tweet aren’t aware of this.

Others pointed out that Biden had confused bagpipes with uilleann (elbow) pipes, a traditional Irish wind instrument that is powered by a musician's arm and emits a similar sound to bagpipes.

However, others defended Biden's apparent mistake, pointing to the fact that dozens of Irish-American institutions regularly use bagpipes at ceremonial events.

The Irish-dominated NYPD, for instance, regularly uses bagpipes at ceremonial events in New York City, while the FDNY Emerald Society Pipes and Drums also use the instrument during parades and ceremonial events.

Several Irish-American institutions additionally use the instrument while marching in the St. Patrick's Day parade.

In any event, there is no definitive proof that bagpipes originated in Scotland. Historians are unable to agree on the exact origins of the instrument, with some claiming that bagpipes come from Ancient Egypt and others maintaining that the instrument was brought to Scotland by Scottish tribes that had invaded Ireland.

However, Scottish Highlanders were almost certainly responsible for popularizing the instrument around the world, establishing bagpipes as their national instrument during times of war and peace at some point during the 1700s.