US Ambassador welcomes Irish female artists to her Dublin residence

Pillow Queens and New Dad featured at the first Creative Minds event in two years, hosted by US Ambassador to Ireland Claire Cronin at her Phoneix Park residence in Dublin. 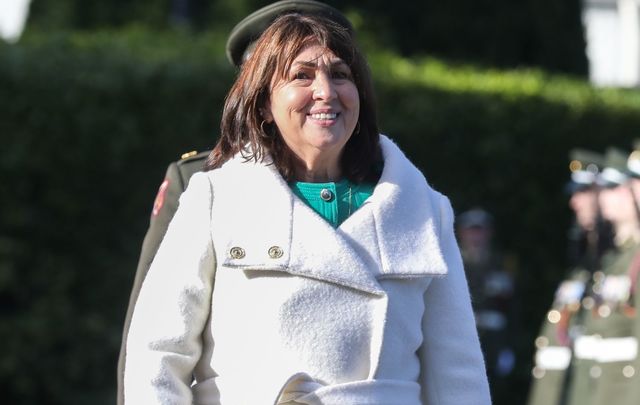 On the night of International Women's Day, Claire Cronin, the US Ambassador to Ireland, invited crowds into her residence in Phoenix Park in Dublin to enjoy a night of live music, part of the Creative Minds Series.

The house was lit up in blue and yellow in solidarity with Ukraine during their invasion by Russia, a solidarity that was brought up throughout the evening's events. US Ambassador Claire Cronin began her address by asking the audience to keep Ukraine in their thoughts.

Pillow Queens and New Dad, two female-led Irish bands, performed at the intimate event to showcase the Irish musical artists who will be attending the 2022 South by Southwest (SXSW) conference in Austin, Texas. Their performances were peppered with remarks from Catherine Martin TD, Minister for Tourism, Culture, Arts, Gaeltacht, Sports and Media, and a Q&A with Angela Dorgan, CEO, First Contact Music.

The event's aim was to highlight the increasing opportunities for Irish women in the arts.

What a thrill to welcome @PillowQueens & @NewDad to play in Deerfield House for the resumption of #CreativeMinds on #InternationalWomensDay
Thanks @cathmartingreen for joining the fun! Good luck all at @sxsw ???? pic.twitter.com/5JsN9AuMvD

Launching the event, Cronin said: "It's an honor tonight to relaunch our long-standing creative mind series. And I have to give a shout-out to our previous Ambassador Kevin O'Malley, who served during the Obama administration. And this program was his brainchild."

.@USAmbIreland Claire Cronin welcomes #CreativeMinds to her Dublin residence with @NEWDAD and @PillowQueens performing for #InternationalWomensDay. An event focusing gender balance in the music scene. pic.twitter.com/6IthdyJKc2

In 2015, the then ambassador Kevin F. O’Malley launched the Creative Minds Series to invite artists, writers, filmmakers, digital culture innovators, and musicians to share their experiences with young Irish audiences. The goal is to find ways to create new collaborations and encourage more creative economic linkages between young people in the United States and Ireland. The International Women's Day event was the first Creative Minds event to take place in real life, due to the Covid pandemic.

Cronin, amid sending the Irish bands off to SXSW, commented on the prominence of female artists in this year's lineup.

She said "It's a welcome progression and something we should continue to strive for. American singer Missy Elliott once said, 'Women are not always taken as seriously as we should be. So sometimes we have to put our foot down.' And the theme of this year's International Women's Day is to break the bias and ask people to me at Mountain a world free of biased stereotypes and discrimination.

"And tonight we are asking some of Ireland's best and brightest to put their feet down."