An Post's "Ulysses 100" stamps were inspired by James Joyce’s use of the ‘Gilbert Schema' and feature photographs from renowned photographer JJ Clarke. 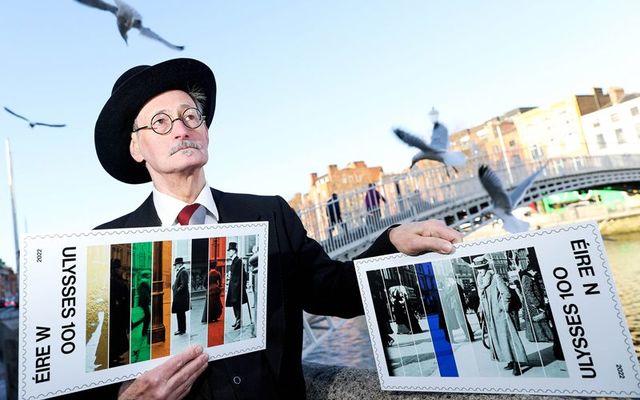 An Post has unveiled two new stamps to celebrate the centenary of James Joyce’s "Ulysses," which was first published as a complete novel on February 2, 1922. An Post

An Post, Ireland's postal service, has unveiled two new stamps to celebrate the centenary of the publication of James Joyce’s "Ulysses."

"Ulysses," which was initially published as a series of stories in an American journal, was first published as a complete novel on February 2, 1922 – James Joyce’s 40th birthday.

Regarded as one of the most influential pieces of modernist literature, "Ulysses" chronicles a single day, June 16, 1904 (now celebrated as Bloomsday) in the lives of Stephen Dedalus and husband-and-wife Leopold and Molly Bloom as they meander through the streets and suburbs of Dublin.

An Post's Ulysses 100 stamps were designed by Amsterdam-based Irish designers, The Stone Twins.

The designers were inspired by James Joyce’s use of the ‘Gilbert Schema,’ an 18-part episodic table produced by the author to help readers understand the enormous complexity of his novel.

The two-stamp design consists of a total of 18 sections, which signify the number of chapters in the book, and features photographs captured by renowned photographer JJ Clarke. Clarke, a doctor from Castleblayney in Co. Monaghan, took vivid images of daily life in Dublin when he was a medical student there between 1897 and 1904.

The inverted type used in the design was chosen to reflect Joyce’s experimental use of language.

The First Day Cover also features both of the Ulysses 100 stamps and a special cancellation mark.

“The claims for 'Ulysses' as the greatest novel of the 20th Century, and the first great modern novel, remain vibrant. Its 100th anniversary shows something else: that 'Ulysses' is as relevant now as a work of art as when it was written. These stamps reflect the unique mix of modernism and classicism that define the novel," said An Post CEO David McRedmond.

An Post has said it expects a strong interest in the Ulysses 100 stamps from collectors, the Joycean community, and those with an interest in literature.

Internationally renowned Joycean expert, Senator David Norris said: “Frozen in time the images on these stamps illustrate remarkably the period of James Joyce’s 'Ulysses' in 1904. It is tempting to think that in the world of fiction these stamps might have adorned Bloom’s letter to Martha Clifford. I congratulate An Post on their production to mark the centenary of the publication of 'Ulysses.'”

The Ulysses 100 stamps and a special First Day Cover commemorative envelope are available at selected post offices nationwide and online at www.anpost.com/shop